For those of you dropping by who are not from DC and are curious as to what an average DC resident thinks of the snow storm, let me just show you where we are as of noonish today: 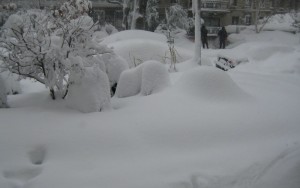 And we haven’t reached the grand finale yet. Trees are getting heavy with a mixture of wet and dry snow. This leads to power outages, a huge problem because road crews can’t get out to fix them. The city promises to have us up and running by Monday. There’s new vocabulary floating about – “Snowmageddon” “Snowpocalypse.” The unofficial snow ball fight in December that rowed up an off-duty policy officer has now gone legit and official in Dupont Circle. The Washington Post reported that Mayor Fenty showed up of course not to take a lickin’ or to show off a pitching arm. (Taking the advise of Loose Lips to be seen as the out-and-about on-the-scene guy in his early campaign days). I wonder if the organizers realize 5,000 doesn’t make a good snowball fight in a city circle. Hopefully only two to three hundred actually showed up. The National Mall should be better for the crowds. Meridian Park even better for a neighborhood crowd. Here’s a schedule. They’ve started already.

I made sure I charged my batteries on the laptop and the cell phone. I always keep a ground phone for emergencies though one friend reported that the Verizon service is down in his home. I’m also stocked with a flashlight and candles. The refilling of the ice trays is a “just in case” the power goes out and I need to put something on ice to prevent spoilage. There’s always the snow outside the window (an old college trick for those of us too strapped to afford refrigerators).

Oddly, I don’t feel the need to make this a catch-up-on-work day. I’m playing Sting’s “If On a Winter’s Night” even though Christmas is over. He says winter is his favorite season. Maybe I can appreciate the situation more from his perspective. A neighbor stopped by to borrow milk. Fortunately I got in the Safeway lines early yesterday for an extra half gallon. Snow emergencies in DC make for great grocery cart theater. You sort of get a picture or narrative of shoppers or you can make one up. I’m milk and butter – indicates a baker, someone who does cook and needs the staples. Pop tarts – someone who doesn’t cook or eat a decent breakfast (I’m commenting there). The most interesting check out was a packet of ham hocks, a 6 pack of Milwaukee beer, and a bouquet of lilies. Oddly, the blizzard is clashing with the Super Bowl, so I saw a lot of tortilla chips, beer and other munchies in the check out lines.

There’s an odd quiet, but lots of delicious smells in the hallways. The network affiliates seem to think everyone’s interested in watching snow covered reporters dip their measuring sticks into the mound and point to stuck vehicles while delivering the message “Don’t go out if you don’t have to.” Oddly after the digital switch, I thought the local news outlets would move these special reports to one of their extra digital channels like the one that broadcasts the weather radar report. The world hasn’t stopped turning because it’s snowing here. DC is a lot like LA in the way we handle weather.

I think this snow exceeds even President Obama’s Chicago expectations. But the White House doesn’t have to worry about a thing. Life goes on. The President recorded his weekly on the topic of small business, and a White House Super Bowl party is still on the schedule. All part of doing the nation’s business. Could the Super Bowl party turn into a slumber party? After all members of the Congress and Senate have been invited. For some reason I find it hard to concentrate on the nation’s business today. And I do want to touch the new snow before it’s tainted by business as usual.