Imagine what peace would look like with 3 or more women at the table. Actually numbers and sex can’t be the sole qualifiers. There are patriarchal women whose framing is no different from the patriarchal men at the table. Official peace processes in use were never designed, built by, for and with women and any marginalized group in mind. Through custom or tradition, the men, the patriarchy, the persons in power have at best put women on the table as transactional bargaining chips along with any disputed natural and financial resources for what becomes a negotiated power grab.

Nevertheless, women need and want a voice at this table. Too often the gun is the loudest voice while the women, children, elders, the vulnerable (those without military might) are mortally silenced.

The women who rise up, organize and demand a seat at the peace table don’t want to be treated like dinner guests. Presence isn’t power. For many women participation becomes a delicate balancing act of negotiating on two fronts: at the seats of power with governments, politicians, military officers, warlords; and on the home front in families where patriarchy can have its strongest roots and impact.

March 25 and 26 (9 pm ET – check local listings) PBS will broadcast Women, War & Peace II, a series of films by women filmmakers documenting the stories of women actively and nonviolently involved in peace making, risking life (and family life) with the hope of changing the course of history. The series is executive produced by Abigail Disney and Gini Reticker for Fork Films.

The series includes four stories many told for the first time on U.S. national television. We finally see the women of Northern Ireland’s Women’s Coalition (Wave Goodbye to Dinosaurs) at the negotiating table. The women elected to the task are steadfast to the goals of peace despite the dismissive and rude reactions from the men in the room. These women could be looking at the conflict reemerging with the UK’s Brexit separation from the European Union and the possibility of the return of a hard border (via trade) separating Northern Ireland from the Republic of Ireland.

The Trials of Spring, (directed by Gini Reticker) confirms the “Arab Spring” branding of the youth-led movement towards a more democratic Egypt was pre-mature. The removal of Hosni Mubarak from office followed by elections that brought the Muslim Brotherhood to power, then the military takeover lead to social regression and a precarious situation for nonviolent women activists and religious minorities.

Naila and the Uprising uses animation to recreate student organizer and activist Naila Ayesh’s story of her imprisonment for being part of a secret network of women in a movement protesting Israeli occupaton of Gaza. Naila’s infant son is brought to live with her in prison. The film tells her story to audiences and also servies as a family document for Naila’s now adult son about his early life through his parents’ experiences with the intifada. 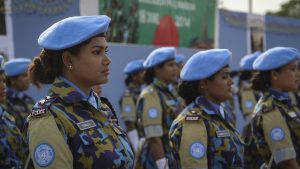 One can’t avoid noticing A Journey of a Thousand Miles is the only story in the series where women are required to carry a gun to maintain the peace. The film follows the all-women Bangladeshi UN peacekeeping unit and their mission to Haiti following the 2011 earthquake that devastated the country. It is also a story of the impact of their service causing conflict in relationships back home.

The films in Women War & Peace II show how nonviolent peace making takes tremendous patience, courage, resilience, and a passion for justice. In these four stories women are forced to use the master’s tools to achieve peace goals. Sisterhood is their additional source of support.