UPDATE: There will be a tribute to Howard Zinn, Monday, February 15 from 6 – 11 PM at Busboys and Poets (2021 14th Street, NW) with Amy Goodman and other special guests; musical performance by Bernice Johnson Reagon (Sweet Honey in the Rock), David Zirin and other friends of Howard Zinn 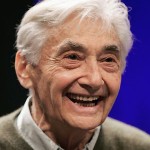 The first time I read A Peoples’ History of the United States by Howard Zinn, I thought, “here’s the Studs Terkel of American history.” These were the stories of the people on the streets and in the streets during monumental events in U.S. history. It confirmed my belief that the best way to learn from history is to know the stories of the people who are on the ground and affected by the powers that be.

Only a few news outlets carried a head line that Howard Zinn died Wednesday at the age of 87. Right now the death of the reclusive novelist J.D. Salinger is the news of the day. Many Americans have a love affair with adolescence. It’s rebellion without responsibility. Zinn challenged us to come of age into our full adulthood as a nation. A Peoples’ History honored the narrative spoken while cuttin’ heads, the family history repeated at the Thanksgiving table, the body language of the laborer after a 10 hour shift.

A celebration of Howard Zinn’s life and work is in the works in Washington, DC. To be continued.

PRESIDENT OBAMA’S STATE OF THE UNION
Enough opinions have been said and written about President Barack Obama’s first State of the Union address last night before the divided U.S. Congress and Senate. Just like we used to sit girl/boy/girl/boy in school assemblies, Congress should sit Republican/Democrat/etc.

Just before the State of the Union, the Washington Post called me for a poll. Lots of questions about Mayor Fenty’s job performance, the school Chancellor, crime, and one question about President Obama’s job performance. “Personally,” I said, “I’m looking at the Congress.” I asked, “Is the next question about the Congress [and Senate]?” “No,” the pollster said. “Taxis. That’s the next question.” Nuf said, here’s the text from the State of the Union. I give it a thumbs up. Let’s see what happens next.

TREME gets the green light from HBO
I’m late to the punch, but HBO is still building the site for the new David Simon drama “Treme.” Simon is in New Orleans now filming additional episodes. UndercoverBlackman is also on the scene and blogging when he has the time. I’ve got a Mardi Gras party to plan at Eatonville Restaurant for the Fat Tuesday Food and Folklore. We packed the joint (the entire downstairs) Tuesday for the Rum! Food and Folklore event. If the Saints win the Super Bowl, New Orleans will have a Mardi Gras like none other. But still lots of work to be done in the Crescent City. Pour another libation.