In Nikki Giovanni’s “Poem for Aretha” she writes: 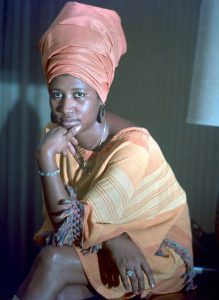 Aretha is now at her eternal rest. The death of Aretha Franklin in Detroit August 16, 2018 at 76, merits, in this opinion, a peach cobbler variation on Don McLean’s “American Pie” and “The day the music died.”

As long as I live in the mortal world I need Aretha’s music.

Nikki Giovanni recorded “Poem for Aretha” on a 1971 breakthrough record, “Truth Is On Its Way” featuring the New York Community Choir. (Aretha Franklin would release her live “Amazing Grace” gospel album with the Los Angeles Community Choir in 1972). The track under “Poem for Aretha” is “Nobody Knows the Troubles I’ve Seen.” Gospel records were hot in the 1970s.

In many ways “Poem for Aretha” is a poem for all giants who endure the road shows, the okey doke contracts, the hangers on with nefarious intentions, the fear of losing fans, family, and friends by putting self-care above caretaking. “Poem for Aretha” was written before the age of social media. Today she would unplug before she has to pass out. But somehow Aretha survived the blow backs and managed to make a way even demanding a 50% cash payment upfront before she would perform. Now we know why Aretha plopped her purse on the piano before performing in the “Kennedy Center Honors.” Only she could. The moment was pure magic.

My first favorite single was by Aretha Franklin. How many times did I ask an able bodied sibling or adult to play, replay the 45 of “Chain of Fools” to the point that like a child’s favorite toy, the audible crackles and pops from the multiple needle drops on the vinyl fused with the soulfulness of the vocals and the rhythm & blues guitar. I needed Aretha’s music.

Aretha Franklin was more important than her music because there would be no music without Aretha, but at the same time there was no Aretha without music. It’s a magic moment when music can make you FEEL and sparks a surprise emotion. Words matter and they had a life of their own with Aretha. Nothing like the monotony and repetition in the bump and grind beat tracks of today. Even as the music changed, Aretha knew she could find her way through it and on her terms. You can’t be separated from your music and be Aretha Franklin. Aretha needed Aretha’s music.

Since the millennium I’ve grown so very weary of being told to recognize the “greatness” of “singers” (quotes intended) who prize volume over interpretation. Spectacle over enunciation. Predictability and sale-ability over –dare I say– R-E-S-P-E-C-T-ability. Growing up with Aretha set a high standard and expectation that very few and perhaps only she could reach. Aretha was also an accomplished instrumentalist, and arranger. That’s all the spectacle she needed.

Listening to Aretha’s playlist over the week has been like having my life flash before my eyes. She was my grounding and groundbreaker. There was no conflict or battle between secular and sacred music and spaces. In her music and musicality they were one and the same. And like church with a majority Black membership and culture, Aretha made you place your troubles and the BS at the foot of the altar she built.

We need Aretha’s music now more than ever.