Once a year I pull out my VHS set of the 1981 miniseries Brideshead Revisited based [almost to the letter] on the 1945 novel by Evelyn Waugh. I have no idea why I love this series. Maybe it was the excellent writing, acting, costuming, setting and characters who would have absolutely nothing to do with someone like me. 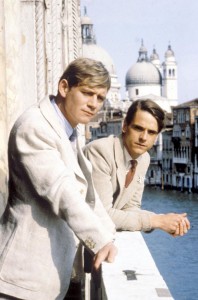 Jac Venza who was executive producer of Great Performances gambled on acquiring Brideshead… from Grenada of the U.K. featuring unknowns Jeremy Irons and Anthony Andrews as Charles Rider and Sebastian Flyte. It would be Sir Lawrence Olivier‘s final performance, Clare Bloom‘s most chilling as the pious Lady Marchmain, and a brilliant appearance by Sir John Gielgud. Brideshead was a British coup dropped on an American audience. Coming at the dawn of the television mini-series renaissance (“Upstairs Downstairs,” “Roots”), Brideshead Revisited, with its unrepentant gay characters, theme, and three artfully crafted nude moments, had enough ingredients to rattle the American public television viewer’s delicate sensibilities. But just the opposite happened.

Jeremy Irons’ star was launched, and a classic was born. Shortly after, Charles Keating (who plays Rex) would make his way to U.S. with the Royal Shakespeare Company (I actually met him). He would continue his career in American soaps with a more recent appearance in HBO’s series “Sex and the City.”
.

When Waugh wrote the novel, he was a recent convert to Catholicism. In many ways, Brideshead Revisited is autobiographical (read more in this April Vanity Fair article about the real Flytes). The more I watch, the more the religious themes stand out. Though the aristocratic Flytes are consumed by religious custom (as Catholic minorities), they can never artfully articulate their ideology or values outside a personal desire for salvation by or against their own will. “It just is” may be the best explanation they can offer. Charles, the agnostic, insists on a debate. But as a friend put it — his arms are too short to box with God. Religion is not logic. Perhaps Charles’ greatest desire is to believe in something.

Note: I have not, and will not see the recent feature film version. Reviews from fans of the mini-series and book were dismal.