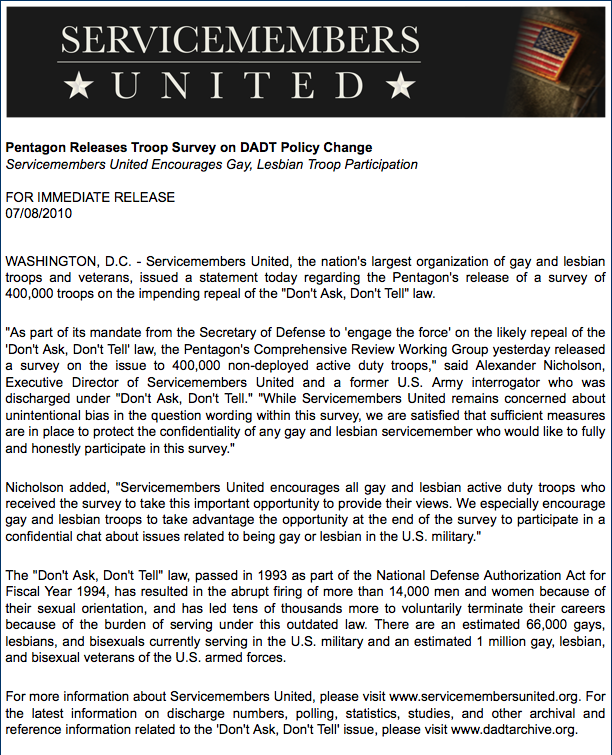 I’m looking forward to meeting Alex Nicholson next weekend. So far we’ve only conversed by email. Alex knows five languages. [I’m jealous.] And he is an Arabic linguist. Alex served in the U.S. Army during the height of 9-11 and its fall out wars in Iraq and Afgahanistan. But Alex was discharged in 2006 because…he is gay.

The Don’t Ask, Don’t Tell (DADT) policy has discharged 54 skilled Arabic linguists from the U.S. military while at the same time the military and branches of government have been scrambling to find people with Arabic language skills. If there is any example of how the DADT policy is cutting your nose off to spite your face or just plain wrong-headed regarding national security, Alex and the 54 other linguists are case in point.

Alex and another discharged linguist, Jarrod Chalapowki appear in Johnny Symons’ documentary “Ask Not.” ITVS Community Cinema is hosting over 50 screenings nationwide. Washington, D.C. will have two: May 17 at 3 PM (Washington, DCJCC – 1529 16th Street, NW); and May 31 at 5 PM (Busboys and Poets – 2021 14th Street, NW). All the screenings are free, but RSVPs are requested for DC – email asknot@communitycinema-dc.org or call 202-939-0794. Alex, Jarrod, and other speakers will be part of the Q&A at each event. (See www.communitycinema-dc.org for more information.)

While doing my outreach for Community Cinema, I seem to have stumbled across some crazy luck. What better time to promote ASK NOT in DC. I’m listening to Kojo Nnamdi’s show now about the DC City Council’s vote on marriage equality aka “gay marriage.” When I logged onto Huffington Post, the lead story at 7:30 AM this morning was the discharge of Dan Choi, a West Point graduate, officer in the National Guard who served in Iraq, is an Arabic linguist (ding-ding), and after an appearance on television where he said he was gay, got his walking papers from the U.S. Army. That appearance was on the “Rachael Maddow Show,” and Rachael followed up with the news of the day about Choi’s discharge.

The military does seem to have a special kind of culture that creates a a bond between service members like no other. I admire their accountability culture and their sense of duty. However, the arguments for DADT in defense of maintaining “the culture” resemble the same arguments that were made to keep women out of the military and African Americans from serving side-by-side with Euro-Americans.

As one friend said while we were discussing DADT, “If I’m in a foxhole or a fire fight, I’m not thinking ‘whoo-whoo’ about the person next to me.”

Inquiring minds are waiting to find out what President Obama will do in the short term, but not so short to be a replay of Bill Clinton’s first 100 days. Secretary Gates has put the issue in the “not high priority” pile, but I suppose it won’t stay there for long.

Second Lieutenant Sandy Tsao wrote to President Obama earlier this year to repeal DADT. Tsao came out and was discharged per the routine. This week she received a hand-written note from President Obama. Short, but in his own handwriting[!].

Sandy – Thanks for the wonderful and thoughtful letter. It is because of outstanding Americans like you that I committed to changing our current policy. Although it will take some time to complete (partly because it needs Congressional action) I intend to fulfill my commitment. — Barack Obama.