> The Arts > Television > The HBCU Ground Beneath These PWI Feet 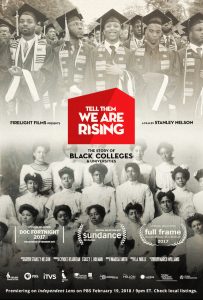 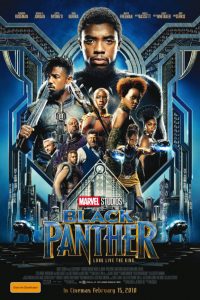 Firelight Media, the film company founded by award-winning documentarian Stanley Nelson, is calling February 19th #HBCURisingDay to draw attention to the broadcast premiere of Nelson’s recent documentary Tell Them We Are Rising: The Story of Black Colleges & Universities on the PBS series Independent Lens.

Before the Monday broadcast the next Marvel blockbuster movie, Black Panther, will have its nationwide release staring Howard University graduate Chadwick Boseman — the #HBCU alumni of the hour who’s been gracing the covers of Vanity Fair and Time magazine. – for starters

FULL DISCLOSURE: I’ve been involved with both entities past and present: organizing a 10 HBCU campus tour for Tell Them We Are Rising (and preview screenings for ITVS, producers of “Independent Lens”); being the playwright for Iola’s Letter — based on the life of journalist, anti-lynching advocate Ida B. Wells — presented as a staged reading at Howard University exactly at this time in 1999 with then-student Chadwick Boseman (or Chad as he was known then) in the cast. The play was directed by Howard drama professor Vera J. Katz.

“I thank God and the ancestors for this opportunity.”
Chadwick Boseman in “Iola’s Letter” program 1999 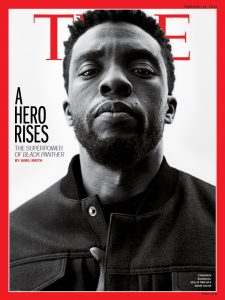 It’s no surprise to me that Chadwick Boseman’s star is rising. He impressed me as Thomas Moss in the reading of Iola’s Letter. Thomas Moss was one of Ida B. Wells’ dearest friends in Memphis in 1892. Boseman became the voice of Thomas Moss in my head for a long while after the sold-out 8 performances (a 9th was added).

Much of my cultural enrichment from age 9 up came from Howard University and its College of Fine Arts. The students and professors (my sister’s classmates and instructors) trained my eyes, ears, and appreciation especially in theater of the mosaic of what some may classify as “the black experience.” I would argue for the plural in “experience”.

Without Howard I would have no idea what the Black Arts Movement is, would not have read the poems of Langston Hughes, or folklore and laughter of Zora Neale Hurston, known of the African presence in antiquity (Frank Snowden), been in the presense of a great artist like Lois Mailou Jones, or to put it bluntly have exposure to the best in arts and culture of the African diaspora. Howard spoiled me for the experience I would have at the small PWI college I attended. Note: PWI (Predominantly White Institution) is something I learned on the road with Tell Them We Are Rising.

That PWI was Oberlin College in Ohio. It was my first PWI in my entire academic life. I chose Oberlin because it was the first to admit students of color before HBCUs were established; was in the same Ohio town with an underground railroad stop in the time of Civil War; the alma mater of the first African American woman to earn a Bachelor of Arts degree; and was [at the time] located in a pre-dominantly African American town of the same name with a sizeable Latino population in nearby Lorain the birthplace of Howard alumna Toni Morrison. During my first weeks on campus I distinctly remember the “plague of robins” as Morrision describes in her novel Sula.

I also noticed the cultural footprint of African Americans at Oberlin was not very big or not what I was accustomed to despite the college’s glorious histories. The conservatory of music at the time was committed to a European Classical music training. There were jazz classes and a class on African American music history taught by the late Wendell Logan, but these were electives. The jazz ensemble didn’t have rehearsal or performance space inside the conservatory. Fortunately Logan was a “can do” and “will do” personality. Just book the hall.

The jazz ensemble was one of the few places where I felt grounded in the way I was grounded on HBCU turf. And even with great theatrical talents like Julie Taymor among Oberlin’s illustrious alumni, theater and dance wasn’t on the level of what I saw at Howard. Those expectations were to be had in Cleveland and Karamu founded by Oberlin alumni Russell and Rowena Jelliffe where Howard professors and alumni could be seen in residence.

What Oberlin did offer me was exposure to different art forms including performance art and artists like Ping Chong and Meredith Monk. My dorm mates brought their grounding assets – El Gran Combo, Hector Lavoe, Ruben Blades, Willie Colon, Celia Cruz and other classic salsa recordings. And I got some reinforcements from visiting artists like Gil Scott-Heron, Ossie Davis and Ruby Dee, poet Sonya Sanchez, choreographer/performer Geoffrey Holder. My HBCU arts experience planted seeds of appreciation and found complimentary companions in new expressions including the old European Classical ones.

My college also gave students resources and space for experimentation. I’ve always been a hands-on learner. If I wanted to put up a play at my PWI college, no problem. “Here’s a space. What else do you need?” Despite some of the quips I mentioned earlier, this made Oberlin the best choice for someone like myself.

“I’d like to thank God and the ancestors for this experience.”
Chadwick Boseman in the program for “A Rhyme Deferred,” written and directed by Kamilah Forbes

In the fantasy world of Wakanda, I still see the Howard alum’s feet firmly planted in the opportunities and experiences he draws from the ancestors. I see the bridges between past, present, and future. I knew as much seeing a video of the red carpet preview of Black Panther in Los Angeles and drummer Jabari Exum grounding the moment before Boseman emerges from the limo. In some ways I was more excited about seeing Exum, an awesome surprise appearance from DC.

At the time my Iola’s Letter play went up, a Hip Hop Theatre movement was emerging among Howard’s students as well as a collaborative of young artists creating new works based on a Hip Hop aesthetic. That circle included Boseman and fellow classmates Hi-ARTS aka Hip Hop Theatre Festival co-founder Kamilah Forbes (currently executive producer for the Apollo in Harlem), and Helen Hayes award winning choreographer/director Gregory Morrison aka Psalmayene 24. On the back of my A Rhyme Deferred program, I notice a shout out to fellow Howard student Ta-Nehisi Coates among many others. Some are now among the ancestors.

I’m no Hip Hop head but I supported these creators and their movements towards a new aesthetic before “In the Heights” and “Hamilton”. I knew my love for historical drama would not qualify me to be part of this inner circle. Yet, my introduction was again through my Howard (HBCU) connection.

What Stanley Nelson gives us in Tell Them We Are Rising is a story that inspires pride and a new look at the value of HBCUs for alumni, prospective students, and persons like myself (who didn’t attend a HBCU) without leaning on the sepia-tinted, cross-fade doo-wop of Black girls in White Edwardian dresses, Black boys in bowlers, and a backup band of rich and famous alumni.

Stanley Nelson is also the filmmaker for the documentary The Black Panthers: Vanguard of the Revolution (currently on Netflix). Even that documentary kicks off with myth busting. As Nelson described during his classroom visits at Claflin in SC, he wanted the audience to see what they wouldn’t expect from a documentary about the Black Panther Party. Every one and anyone connected to the Black Panther Party had a different perspective, experience, or opportunity. And of course, you can’t capture them all in 90 minutes.

HBCU administrations have struggled with students who want to move their programs forward from the mythical past. The sepia-tinted world and American dream promises are often held up to qualify the value of the institution for preparing students to assimilate respectfully into what can be called the “social order”. Sadly the cultural and artistic assets of these institutions are simultaneously neglected, undervalued, and/or rejected and lost. This parochial house cannot stand when it is divided between limiting traditional values and new ideas.

Alain Locke learned as much when he was fired from Howard University’s philosophy department in 1925 for siding with students who were being encountered and embracing the ideas of the “New Negro”. BTW Locke also had PWI experiences at Harvard and Oxford Universities. This and other stories are included in a ground-breaking biography The New Negro: The Life of Alain Lock” by Jeffrey C. Stewart. I see a tinge of “New Negroness” in the conceptualization of Wakanda in Black Panther – a fusion of modernism (tech today), continental African aesthetics, and the ability to transform and reversion oneself in times of crisis and awareness (African American).

I’ll see Black Panther on the same #HBCURisingDay before the 9 PM broadcast of Tell Them We Are Rising. I’m in that throng of ticket buyers who took advantage of advance sales. I’ll see it for Chadwick Boseman though I wish there was this much excitement around his previous films — ’42, Get On Up, Marshall. Maybe people will catch up on the stream. I’d like to think my Ida B. Wells play helped pave that trajectory. I also enjoy the comic book hero films for pure entertainment value. They’re becoming America’s 21st century mythology.

If there are any shoulders the Black Panther filmmaker, cast and crew stand on it is stories, cultural treasures, and experiences, fortunately documented by Stanley Nelson and many others. The power of the myth is strong, but making connections between myth and fundamental truths is essential.

I too would like to thank these creators, the ancestors, and the source of all creation for the gift of opportunities and experiences I’ll treasure for my lifetime. Much of it is possible thanks to my HBCU encounters. On the day I graduated from Oberlin I wore a cap and gown. Cap and gown was optional at Oberlin. Students chose not to wear them in protest of the 1970 Kent State student shootings by the National Guard. A similar incident would happen in 1972 at Southern, a HBCU in Louisiana. Their story is revealed in Tell Them We Are Rising.

I draped a long strip of woven kente (a gift from my sister) around my shoulders. I believe I was the first non-Ghanaian at Oberlin to add kente to the graduation robe. That choice was inspired by Jeff Donaldson, an art professor at Howard and a member of the Africobra artist collective in Chicago during the Black Arts Movement. On graduation day at HU Donaldson walked with the professors in his grand robe and regalia of beautiful hand-woven kente. You couldn’t miss him. I never forgot it.