7:46 PM
I’m getting settled in. Wanted to get in the Cullen back room and find a spot close to a plug. Considering that they are reporting record low turnout, my laptop battery might outlast election night. But this means it could be anybody’s race.

Busboys and Poets (5th & K, NW) is where the Andy Shallal campaign will hold their watch party.
People are starting to trickle in. A few are outside the door having dinner.

I’m trying to decide where people can send me any useful updates for this blog.

We’re watching News Channel 8 for the results. And I can embed it.
Update 4/2/14: In consideration of my readers and the noise level of this live stream, I removed the embedded frame and replaced it with this jpeg that links to News Channel 8 – www.wjla.com/news/newschannel-8/ 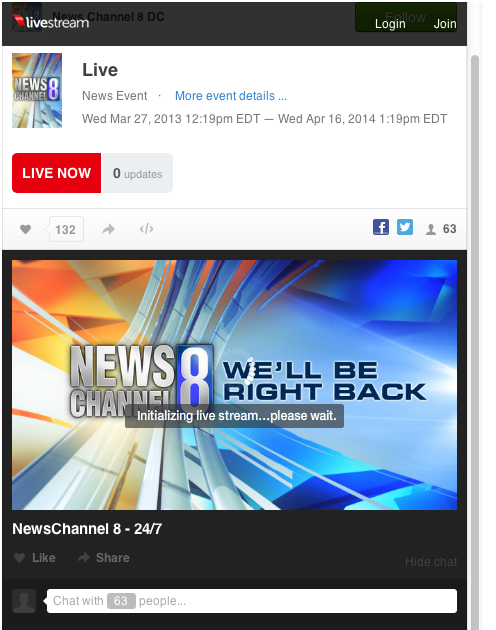 8:27 PM
I’ve posted a request for updates from my FB friends. They’re a lively bunch. The extended family of Andy Shallal and campaign workers are now in the room.

Let me return to the 3 items from my introductory post regarding this election. DC is a changed city. Anyone who’s been away for 3 or more years will tell you. The city has changed. But what does that mean for DC politics? Home rule has only been around since December 24, 1973. A Merry Christmas. Compared to counties and states, that’s not a long time for a citizenry to choose their elected officials.

The old guard includes The Washington Post. Can the newspaper sway voters to give their vote to their endorsement – Councilmember Muriel Bowser?

1100 newcomers into the city each month. Reports of record low turnout at the polls. I think the Washington Post may have called it in terms of impact, but the specifics are yet to be determined. Maybe the long-time residents stayed home. What were the numbers for early voting?

How politically progressive is DC? How do we measure that? How do we define it? That comes with the debrief post-election night as well.

Room’s starting to fill up. Here come the signs.

High fives! and kisses all around.

If you're working a poll or just like hanging around, take a picture of the closeout tapes and tweet 'em to me! #DCision14

9:07 PM
Marjan Shallal is here! Here she is from this morning at one of the precincts.

Andy Shallal asked if he would run again on @wamu885: 'I think I would keep that option open, yes'

9:48 PM
Energy in the room is good. Room is full at Busboys and Poets. But no returns from the Board of Elections. It’s now 1 hour and 48 minutes (nearly 2 hours) since the polls closed. As I mentioned earlier, I’m looking at the results and what they reflect about political culture of DC (local) in the 21st century. Are we there yet? Meaning I can wait until morning for the outcomes and then process the rest.

Links to catch while in route:
http://www.washingtonpost.com/wp-tran/local/2014-dc-mayoral-primary-results/

And the winner of the Democratic primary (for Mayor)….The Bowser Express!

The win is decisive despite problems with electronic voting machines at precincts which delayed election results. Early votes and paper ballots were counted first (I keep telling you people). Make a note of these voting machines for all elections to come. The delay prevented me from staying on site at Busboys for the long haul. Longer hauls awaited me the next morning.

I’m still reading the final numbers from the Board of Elections to find out if this election was an indicator of anything for the city other than the “We don’t trust Gray” mandate. Is a 22.5% voter turnout a mandate? Was there fear among the politially motivated of another federal takeover and appointment of another Control Board if there was an indictment?

But the answer about “Washington Post as decider” – definitely a political influencer and player.

Impact of newcomers – Leaning “No impact.” But need to see the numbers for registered voters (new registrations).

Progressive city? – Leaning “No.” Moderate. Or is “Pragmatic” the new “Liberal Conservative”? For this one I’m looking closely at Tommy Wells’ numbers to make some kind of determination. Andy Shallal came in 5th overall and was ahead of Councilmember Jack Evans in Ward 1 where Shallal lives and where Evans launched and pitched his campaign tent. Shallal pitched his campaign tent in Ward 8 where Evans came out ahead of Shallal. Looking at that scenario as well.

For results of all the DC primary races, visit DC Board of Elections And Ethics:
https://www.dcboee.org/election_info/election_results/2014/April-1-Primary-Election