> Places > Washington > In a Sentimental Mood – It’s Duke Ellington’s Birthday
Today is Edward Kennedy “Duke” Ellington’s birthday (as well as a few college classmates of mine). This is the first time I’ve posted this photo from my Aunt Emma’s scrapbook. It’s a photo of the teenage Edward Kennedy Ellington, I’m assuming taken around maybe 1914 or 1916. I did send it to Undercover Black Man (David Mills) when he was having writer’s block. Thought he’d find it fun. Ellington went to Armstrong High School in Washington, DC and even had a teacher named Miss Boston (no relation I think). He was composing rags and played the piano at parties. So how did this photo end up in my aunt’s photo album? I can only assume through her uncle Edgar. Ellington wrote the following in his autobiography: 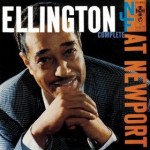