Father’s Day is always a mixed bag for me. On the one hand, I’m proud of the men who are stepping up to the plate for their sons and daughters. They are proud to be fathers and equally proud of their children. Many of these fathering men are friends and relatives of mine. I wish them all the best and salute them today.

Father’s Day comes after the anniversary of my own father’s death. This year will be the 17th. As I’m still piecing it all together, I can best describe my dad as a man who found the responsibilities of fathering very challenging; someone whose absence could be felt in his presence. Alcoholism was part of this complicated dynamic. Perhaps a strained relationship with his own father had a role. Right after his death, a friend said that maybe my father can be to me in death what he couldn’t be in life. Well, on a lark, years ago, I did the Hollywood la-la-land thing and went to a spiritual reader. This person came highly recommended and had a steady Hollywood customer base. During the session I said very little. He did all the talking. Yes, this matter-of-fact reader came out the mouth that my father was deceased and added that my father’s had no spiritual presence in my life. Read – nothing’s changed.

I remember how difficult it was to find the right Father’s Day card to give to my dad. None reflected the nature of the relationship or lack there of. There are no pictures of my dad at my birthday parties. You get the picture. But for what it’s worth, there were a few bright moments and still many mysteries. 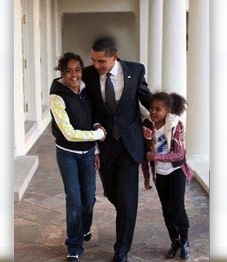 I have to say I’m profoundly moved seeing Barack Obama with his daughters Malia and Sasha. I wonder if these girls know how fortunate they are even when dad doesn’t seem to be on their side but for their own good. I’m also heartened that their father is trying to make up ground for the absent father in his own life.

I grew up without a father around. I was lucky enough to be raised by a wonderful mother who, like so many heroic single mothers, never allowed my father’s absence to be an excuse for me to slack off or not always do my best. But I often wonder what it would have been like if my father had a greater presence in my life.

I suppose even presence would’ve been better than total absence. I can only make up ground by supporting and encouraging the fathers I know to be present and engaged.

From the White House blog (You don’t have to sign a pledge to just do it – but here’s the information):
This Father’s Day President Obama is kicking off the Year of Strong Fathers, Strong Families as part of his Fatherhood and Mentoring Initiative. It’s an effort with partners from around the nation to create simple opportunities for dads and kids to connect. Whether it’s a free game of bowling, a Major League Baseball or WNBA game, a visit to the zoo or aquarium, or discounts for dads and kids through partners like Groupon and LivingSocial, we’re excited to help create small moments that can have a big impact.

This is one of my favorite videos by a father friend. I’ve posted it before:

A loving memoir on the making of a writer – Fathering Words by E. Ethelbert Miller (another father friend). An excerpt is posted today on his blog www.eethelbertmiller1.blogspot.com.