> People > The State of Things…and the Union

Robert L. Lynch, president of Americans for the Arts, a lobbying group, said in an interview on Monday that the arts provide 5.7 million jobs in the United States that generate about $30 billion in taxes, nearly $13 billion of which goes to the federal government. “If they’re serious about jobs and they’re serious about income, they would invest more in the arts,” Mr. Lynch said. 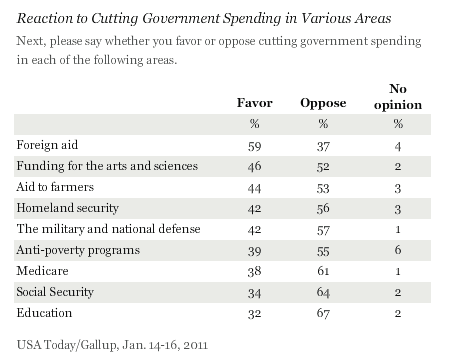 Like the President’s State of the Union, it appears the poll reflects strong support for home-grown domestic spending.

State of the Union

President Obama’s weekly address, “We Can Out-Compete Any Other Nation,” was a preview of his Tuesday State of the Union speech. Thank goodness the snow didn’t come until today. Perhaps that’s as much weather fact as metaphor when it comes to politics on the Hill.

BTW not only are we about to be deprived of bus service, and electricity in spots in this wintry wetland, the radio station just went off the air. Can we Out-Compete something as simple as snow?

The White House didn’t depend on carriage to get the message out this year. There was a central on-line command center of senior White House Officials answering questions. President Obama does his own YouTube Q&A tomorrow at 2:30 PM. You can vote on the top questions.