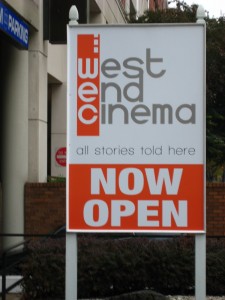 A few months ago, a friend emailed an introduction to me and Josh Levin. Josh, who had been working in film distribution and marketing in New York City, was returning to DC to re-open the West End Cinema multi-screen in its old location on 23rd Street as a new independent arthouse theater. Of course, the West End neighborhood isn’t what it used to be since the exit of Blackie’s House of Beef and the arrival of Trader Joe’s, Starbucks, Walgreens, and the Ritz Carlton. How will the movie house fit back in with the new neighbors?

I invited Josh to give me an Eclectique Interview.

E916: You are a native Washingtonian who’s returned to DC to re-open a movie theater. What brought you back?
JL: I always planned on returning to DC, and one of my life ambitions has been to open a movie theater. Circumstances conspired to make this dream a possibility, starting with the good fortune of meeting Jamie Shor, who is my partner at West End Cinema. Jamie and I connected because we both feel that there is a huge void in the DC film marketplace. I can’t believe that DC lost all the independent theaters in Georgetown, Dupont Circle, Foggy Bottom and the West End, and I know Washingtonians love going to the movies. The film exhibition landscape is controlled by a small handful of chains, and Jamie and I feel strongly that four or five corporations shouldn’t be making all the movie decisions!

E916: What kind of movie theater is West End…meaning what is your vision for it?
JL: Jamie and I have a shared vision for the West End Cinema, which is reflected in our tag line: “All Stories Told Here.” Our goal is to offer Washington audiences independent, foreign and documentary films that are entertaining, compelling and currently being denied entry to this market. More specifically, West End Cinema is a small three-screen theater with meeting and reception space, and more diverse food and beverage options than the typical theater, including a full bar.

E916: DC had an arthouse movie scene years ago, in the late 70s early 80s…do you think it’s returning? What makes it different now than then?
JL: I don’t think the interest in independent, foreign and documentary films ever left. The reason most of the great movie theaters in DC closed is due to rising real estate values. The sad fact is that CVS can pay top dollar for retail space with high ceilings.

The other big difference is that the supply of really good films has grown as filmmaking has become less prohibitively expensive, so there are more films that deserve an audience.

E916: How can filmmakers or producers get in contact with you if they have something they’d like to show?
JL: The best way is to go to westendcinema.com and go to the “contact us” page.

Here are a few flicks that caught the attentions of this blog and friends that will be playing at West End Cinema.

Starring James Franco in a career-defining performance as Allen Ginsberg, HOWL is the story of how the young poet’s seminal work broke down societal barriers in the face of an infamous public obscenity trial. In his famously confessional style, Ginsberg – poet, counter-culture icon, and chronicler of the Beat Generation – recounts the road trips, love affairs, and search for personal liberation that led to HOWL, the most timeless work of his career.

Master filmmaker Frederick Wiseman turns his veteran eye to the richly textured environs of the boxing gym. Lord’s Gym was founded sixteen years ago in Austin, Texas by Richard Lord, a former professional boxer. Populated by people of all ages, races, ethnicities and social classes–a melting pot in its truest form–professional boxers train alongside amateurs, teenagers, moms and dads and anyone trying to reach a goal through the rigorous workout.

You Will Meet a Tall Dark Stranger

Okay, yes, this blogger is still curious about what Woody Allen is up to…on the screen. Woody Allen‘s You Will Meet a Tall Dark Stranger follows a pair of married couples, Alfie (Anthony Hopkins) and Helena (Gemma Jones), and their daughter Sally (Naomi Watts) and husband Roy (Josh Brolin), as their passions, ambitions, and anxieties lead them into trouble and out of their minds. Taking its title from the prediction fortune tellers use to beguile their marks, You Will Meet a Tall Dark Stranger illustrates with wry humor how easy it is for our illusions to make fools of us all.

The West End Cinema is located at 2301 M Street, NW at the corner of 23rd and M (use 23rd Street entrance.). Visit www.westendcinema.com