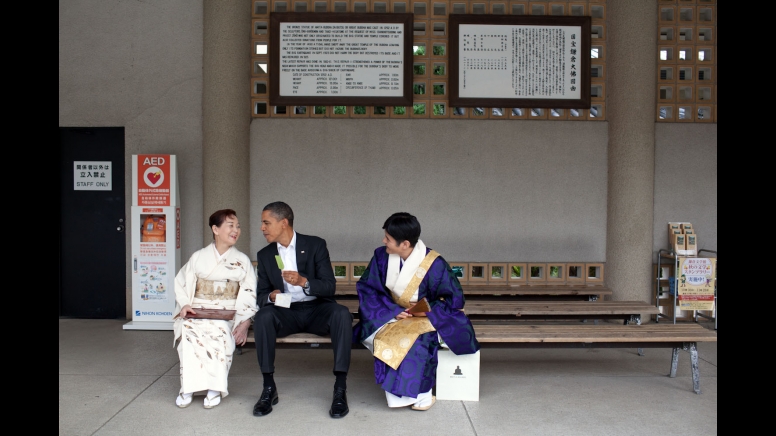 We haven’t heard much about the President’s trip to Asia since the breakdown of trade talks in South Korea. A bust according to news outlets. Was it a total bust? No one’s talking about it now. Personally, I like this photo of him having green tea ice cream on a visit to the Great Buddha of Kamakura at the Kotoku-in Temple in Japan. Will the President’s moments of Zen be interpreted as being out of touch?

I’m still trying to figure out why the headline, “Michelle Obama Wears Headscarf…” on Huffington Post. Michelle Obama in a hardscarf visiting a mosque Indonesia — how bizarre (read sarcasm). Fortunately, someone put things in context at the Washington Post in this slide show “Women, power, and the headscarf.” The First Lady’s Prova scarf was made in the USA. Her suit was by another American designer, Stephen Burrows. Burrows also designs for Target. Are we talking a trade deal boost for American designers?

This administration not only inherited a massive national economic and mental meltdown, but must adopt big agendas when the time comes to make a move. “Change” is fast in elections; slow in governing. You go to Asia to talk security, trade, reaching out to Muslims, you’re not going to get everything you want out of the trip.

Time to bring it home.

As President, time and again, I’ve called for new limitations on earmarks. We’ve reduced the cost of earmarks by over $3 billion. And we’ve put in place higher standards of transparency by putting as much information as possible on earmarks.gov. In fact, this week, we updated the site with more information about where last year’s earmarks were actually spent, and made it easier to look up Members of Congress and the earmarks they fought for.

The earmark debate is going to produce some interesting political drama in the months to come. We heard this in the 2008 elections. The problem with earmarks is they have benefits and abuses associated with them. When it comes to legislation, they can be necessary spending evils — for people who consider earmarks evil. States get building and infrastructure projects. Universities get research grants for science, humanities. Medical centers may get new state-of-the-art equipment. Someone may get a job thanks to their representative or Senator. Someone may get a big cash bonus.

On the website mentioned in the President’s Weekly, you may find earmarks worth fighting for and money well spent. And then, President Obama, offers an example of earmark abuse.
We can’t afford Bridges to Nowhere like the one that was planned a few years back in Alaska. 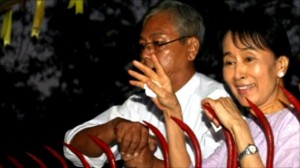 President Obama’s Fellow Nobel laureate and Myanmar’s democracy leader Aung San Suu Kyi was released on Saturday. She had been under house arrest for nearly 15 years. This was not the first house arrest for Suu Kyi in her political career. Because the powers that be are still in power Myanmar, will the press call her weak as well?