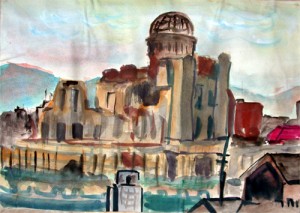 Rev. Rob Hardies, senior minister of All Souls Church, Unitarian in Washington, DC (my member church), sent this letter from Hiroshima via our church’s e-blast list. In 1947 Rev. A. Powell Davies, then senior minister of All Souls, was so moved by the devastation and impact of the atomic bomb dropped on the city 65 years ago today, that he mobilized children from the church to reach out to school children in Hiroshima by sending them crayons, paints and other school supplies. Rob tells the story in the letter.

For years these drawings have been displayed on the walls of the church. Perhaps this year, I am more aware of their significance. Rob and a delegation are returning these drawings back to the children (not so young now). Rob’s letter is copied below.

Dear All Souls Members and Friends,

Today marks the 65th anniversary of the United States’ bombing of the Japanese city of Hiroshima, an event that killed over 100,000 people, reduced the city to rubble, and inaugurated the atomic age. For the first time, we possessed the awesome power to destroy both our species and the Earth that we call home.

I, along with five All Souls members, have the honor of being in Hiroshima to commemorate this terrible event and to celebrate a seed of hope that was planted in its aftermath: the small but significant exchange of gifts of peace between the children of All Souls Church and Hiroshima’s Honkawa Elementary School.

Many of you know the story. Inspired by a call to action from All Souls’ minister, the Rev. A. Powell Davies, the children of All Souls in 1947 collected half a ton of school supplies-crayons, paint, and paper-to send to the children of Honkawa school. In appreciation, the Japanese children sent back beautiful drawings of Japanese life slowly returning to normal in the wake of the devastation.

In a moving ceremony last Saturday these drawings-recently restored-were reunited for the first time with the children (now in their 70s and 80s) who created them. They are now on exhibit at the Honkawa School Peace Museum and in the last week alone have garnered thousands of visitors and significant attention from the Japanese press. We are accompanied in Japan by filmmaker Bryan Reichhardt who is completing a documentary about the drawings and the relationship between All Souls Church and Honkawa School.

This has been a rich and moving week for our delegation. In addition to meeting with the hibakusha who created the drawings (hibakusha is the name given to survivors of the atomic bomb), we were warmly received by the current students and faculty of Honkawa school and other schools to whom All Souls sent supplies, we worshipped with our friends at the Japanese Buddhist sect Rissho Kosei-kai (longtime partners of Unitarians in international peacemaking), and at a memorial service last night for the Honkawa schoolchildren who died in the bombing, we were honored to be the only non-Japanese invited to lay flowers at the shrine to the dead.

I am reminded during this trip that relationships place upon us responsibilities. We have a duty to be morally accountable to the relationships we’ve entered into. I believe our relationship with the people of Hiroshima places a responsibility on us to continue to share the story of these drawings and to work for a world that is no longer threatened by the specter of nuclear annihilation. We are called to be peacemakers.

Our small group looks forward to returning to Washington to share with you the stories and images from our trip and to explore ways that, together, we can take up the responsibilities of this important international relationship. Personally, I look forward to returning to the pulpit on August 22 and celebrating Homecoming Sunday with all of you on September 12. And I wish you both love and peace on this important anniversary.