JOSE ANDRES: NO MAS RIDGID RIDGEWELLS
Star chef and restaurateur Jose Andres was in town this week with his next big thing – the giant paella pan. I believe the Jolly Green Giant size cooker made two public appearances in town this month — at the White House Farmers Market which is open for business through November 18; and a special preview of a new joint venture between Ridgewells and Jose Andres Catering at the Long View Gallery on 9th Street, across from the Walter Washington Convention Center.

Jose is probably the primary person who made tapas or the little plate acceptable to DC diners accustomed to measuring food quantity against price. I remember going to Andres’ Jaleo opening week just to enjoy a pan of paella and sangria. You could find paella here and there in DC, but outside a backyard party with Spaniards, Jaleo was as close as I could get.

I missed a lot of the passed hors d’oeuvres at the tasting, but I was able to sample:

That’s Jose presiding over the paella pan in the back of the gallery. 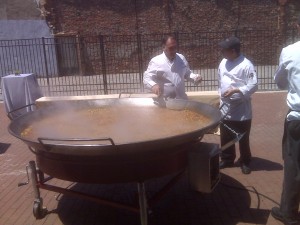 Back in the day, having a Ridgewells truck unload at a wedding reception or any event meant white linen table cloths and napkins, real bone china and silver, and elegant center pieces for a huge price tag. The food would be so-so, but image was everything. As the foodie explosion hit the “established” Washington scene, Ridgewells probably was losing favor especially as chefs were becoming mini celebrities (even flown in from other locations), and food was the star. Today one may be impressed by the tent and lawn chair trucks. Party planners craved more than a shrimp cocktail and carving station. Hosts were not ashamed of serving elegant “street food.”

Jose made his exit from the gallary just as soon as the giant paella was done. Our exits were gifted with hand made candies:

This may be Ridgewells’ reawakening. Let the white linens be damned.

DOS (2) IS THE MAGIC NUMBER 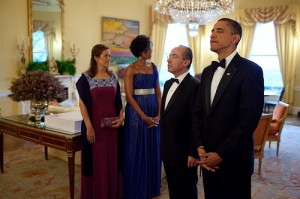 It’s been two days since the 2nd State Dinner for the Obama Administration at the White House. So far no after-party drama. It was the first State Dinner for the new Social Secretary Julianna Smoot. Smoot dashed, flashed a quick smile and waved to the cameras, and that was that. This time the honored guests were President Felipe Calderón of Mexico and his wife Margarita Zavala. A celebrity chef was brought in: Rick Bayless of Chicago…a favorite of the first couple.

Robin Givhan and Roxanne Roberts of The Washington Post were on First Lady and State Dinner duty (what appears to be a pro forma assignments for these Style writers). Robin also covers fashion for the Washington Post, but is now DC based as the feature cultural writer covering the Obama administration. I feel an eclectique interview coming on.

There’s more to this picture than just the protocols of diplomacy. I’m curious about what happened and what was said off camera related to immigration, migrant workers, drugs, crime, trade, and other topics in which one country’s actions impacts the other. How about that oil spill? After all, it is in the Gulf of Mexico is it not?

Even Michelle Obama got her share of the conversation when she and First Lady Margarita Zavala visited an elementary school in Silver Spring, MD. A second grader revealed to the First Lady that her mother didn’t have papers and President Obama wants to send her mother away. I tell you, be careful what you say around kids. I feel bad for that little girl when her family saw the story.

You can read Robin’s State Dinner reports here, and here. The second story features three organizations that were invited to the party: Mary Center, Martha’s Table, and Miriam’s Kitchen (where I’ve volunteered to serve dessert during the Big Read). First Lady Michelle Obama has visited or volunteered at these non-profit groups.