Years and years ago, I told the mezzo-soprano Denyce Graves, (before she became a star) that I couldn’t sit through an opera performance. That I couldn’t listen to opera unless I was doing something at the same time…like frying chicken. 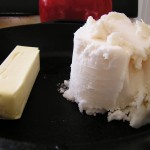 Well, that’s what I’m doing today. I’m frying chicken. And I’m going to select a soundtrack for the frying. More on that later. Our “Great Chefs” potluck group is celebrating Edna Lewis. Last summer we honored Julia Child for her birthday which coincided with the release of the film “Julie and Julia.” Read all about the $200 Coq au Vin which I posted on this blog at that time. 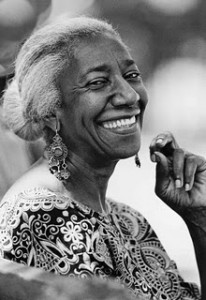 This won’t be $200 fried chicken, but also it won’t be the fried chicken you get at the fast food joints either. This is Edna’s Virginia Fried Chicken from her book The Taste of Country Cooking. It’ll be pan fried. There’s no batter, no brine, no double dredge, no buttermilk. It’s just fried chicken, the way my relatives always cooked it back in the day…in lard (later Crisco) with butter. Here is our potluck menu:

My arteries are bracing themselves. I’ve been on a 50/50 vegetarian/omnivore diet for the past several weeks in anticipation of this event. My vegan friends will probably never eat at my home. Animal flesh has touched my utensils, not to mention the popping grease that will hit counter tops and other flat surfaces in the kitchen once I drop the floured chicken pieces into the pan. I’ve already said a prayer — that the chicken will cook through.

To be honest, it’s rare that I make pan fried chicken.

In The Taste of Country Cooking, Edna writes:

In Freetown, fried chicken was a very special dish. Like many other things of that day, frying chickens were produced only once a year in late spring through early summer. They were hand-raised and specially fed–producing the most delicious-flavored chicken. We fried them in sweet, home-rendered lard, churned butter, and a sliced piece of smoked ham for added flavor. The first fried chickens were served at Sunday morning breakfast when the outside work was finished. It was leisurely enjoyed with hot biscuits and delicious brown gravy.

As far as fried chicken goes, I emphasize Edna’s words “special dish,” “produced only once a year,” “served at Sunday morning breakfast when the outside work was finished.” You just can’t sit on fried chicken. Four minutes to go before show time. I’m about to put the black skillet on the stove and clear the area. My biggest dilemma is where to put the grease when the work is done. There used to be cans for this. Those round aluminum things with a strainer inside and a top to keep it all tight and covered.

To be honest I do listen to opera inside concert halls. I’ve heard Denyce sing many times in recital. No fried chicken was involved. My soundtrack for cooking will be a CD Denyce produced several years ago featuring multiple artists. It’s called “Church.”

Update: Okay, this lard smell is pretty funky (and I mean “stank”). Haven’t been around this smell since I was maybe 7. But the chicken has a nice brown color. I’ll arrange it on my Aunt Emma’s platter for a picture once it’s done. One piece did get a little over cooked. Gotta watch it closely. Right now I’m in the home stretch which is always ripe for screw ups.

Update: My Aunt Susie called just in time. Told me what to do with the grease and to validate that this was an authentic Virginia fried chicken recipe minus the gravy. Gravy is a “country folks” thing she says.
Et voila! 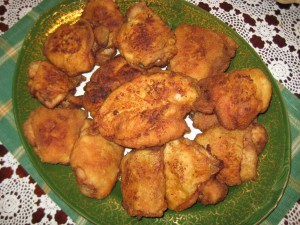 Update: My sister sent me a pic of one of the caramel pies. Also from The Taste of Country Cooking. Update: Great chefs! Great night! But another friend said I made the “opera + fried chicken” comment to her, not Denyce Graves. Don’t you hate when friends rat your memory slips out. But we were all in the same musical circle. I’m sure I repeated the comment as we were all off to see another operatic recital.