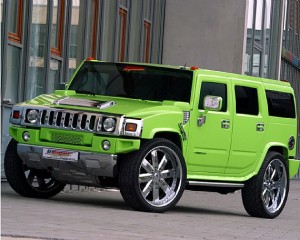 The Hummer has been banished to Retro-World. And the kingdom rejoiced. Government supported General Motors is shelving the Hummer after a failure to land a sale with heavy equipment maker Sichuan Tengzhong Heavy Industrial Machines Co. in China. What does China know that we don’t?

Hummer sales reached their peak in 2003 with over 30,000 sold, then steadily dropped off after 2005. In 2009 they sold under 2,000. The Hummer site is still up and running with 2009 models for sale. Word was this was the most inefficient, gas guzzler on the road – 7 miles to the gallon. It was a symbol of American ego to have money to burn in your gas tank. A Hybrid version was proposed a few years ago, but I guess that’s shelved too.

For me Hummer’s were the most obnoxious vehicles on the road especially in cities. Sure, they fit in lanes in LA and maybe Houston, but they took up 1 1/4 lanes in more dense urban terrain. There was never that much room in them to be a family vehicle. And I always wondered if they were covers for other inadequacies. Hummers were based on the Humvee military vehicles from the Gulf War. Legend has it that action movie star (now Cali governor) Arnold Schwartzenegger suggested the consumer version in 1992. Jeep made a successful transition from military (World War II) to civilian use (1950s) even though the shocks can sometimes make you think you’re on some kind of crazy amusement park ride. But I suppose that has been the charm of the Jeep, especially when it came to climbing over things.

I never saw any charm in the Hummer. Case in point – the first big DC snow ball fight at 14th & U.

Could this be the final narrative of the Hummer. Or will it be “size mattered”?