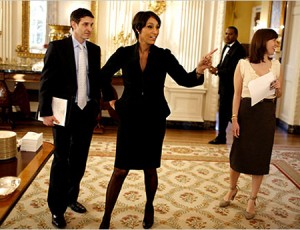 Yesterday, I had the pleasure and opportunity to see White House social secretary Desiree Rogers and deputy social secretary Joe Reinstein at a meeting of NATCAP, the national society of government meeting professionals inside the National Archives building in downtown Washington. I have to give NATCAP credit, so far there has been no press to my knowledge on this public appearance by Ms. Rogers. And it was a great opportunity to get a sense of her work and professional style. I can see how her staff and friends would enjoy her company and work tirelessly to back her up.

The presentation was set up as a conversation/interview. Everything and everyone was relaxed and friendly. Both Rogers and her deputy secretary reflected on their first year — one year to the exact date when they were assigned to organize the viewing booth for President Obama’s inauguration. One of the challenges of working in official Washington is knowing the rules and protocol for official and even unofficial events from receiving lines, table seating, and yes, even parade stands. Apparently, no one left a seating chart for the next occupant, though past White House social secretaries left phone numbers for advice which Roger’s said she faithfully used.

If you’re really into this, the U.S. military has something called a “Protocol Precedence List” which is a rank and file order from the executive office through the military. You can see a 2003 list here.

Personally, I’m surprised there isn’t an Emily Post White House edition inside the White House for the basic things like seating, receiving lines etc. But when a new administration is coming into the offices of a previous administration, it probably takes 6 months just to find the stapler.

The interview didn’t highlight “the thing” that happened in November, but Rogers was not shy to reference the media fall out with light humor and move on. The audience was with her on that note. Overall, she and her team organized 309 events in their first year, some scheduled in advance, many dropped in their laps like Presidential statements. Reinstein is in charge of talent for concerts etc. at the White House as well as some of the “holiday” or traditional celebratory events like the Easter Egg Roll, Cinco de Mayo etc. Rogers noted that no matter who’s in office, there are some traditions that will not be replaced, such as paper invitations from the Calligrapher’s office. Though this White House aims to go green, not all occasions are appropriate for the email or paperless invite.

Rogers says with every tradition, the Obama White House likes to insert something new. Even if that means inserting a guest who likes classical into the country music concert. “How do you widen people’s perspective? How do you broaden that experience?” Rogers said. When she and the deputy secretary talked about the arts, that was when I really leaned into the conversation. Apparently each performer at the White House is asked to do a service activity whether it be a master class with young artists or something in the city.

Rogers has goals for year two including a work/life balance for the staff. But she says they will bring more focus to dance, theater, films and science and technology in terms of themes for upcoming White House events. This year’s Easter Egg Roll will also connect with Michelle Obama’s campaign to address childhood obesity. I guess that means no Cadburys. The WH works in partnership with groups or corporations like PBS for the Easter Egg Roll, and the Disney Company which is bringing you Tim Burton’s “Alice in Wonderland.” Johnny Depp was at the White House in his Mad Hatter costume Halloween night. And Rogers, recalled, many young men showed up dressed as the President. (Note: Patricia Nixon, daughter of Richard Nixon, threw a big WH Halloween party for DC’s kids with TV stars from ABC’s “Dark Shadows” in 1969) 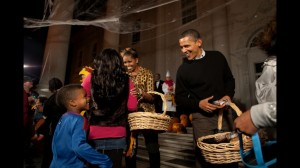 The challenge for WH events is to strike the right balance of mood, style, substance, access, and inspiration in these very trying times. Though Halloween was sited as their favorite event of the 1st year , I believe the right balance was achieved when Rogers and her team coordinated the recycling of the old tree ornaments left by previous administrations. That in addition to bringing in six trees that could be replanted. And I’ll say, if “the thing” hadn’t happened, the first state dinner would’ve been considered a crowning achievement.

This is definitely a different kind of White House social secretary office. Though Rogers calls the White House, “the people’s house,” let’s face it, you just can’t get around the fact that what makes the White House and its events special to any and all is to be [officially] invited in.