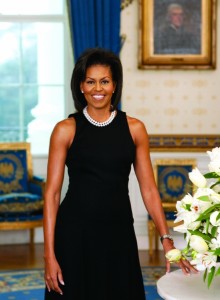 Michelle Obama celebrates her 46th birthday today. Last night Nora’s, an organic restaurant in DC’s Dupont Circle, was the scene for the First Lady’s surprise birthday party. Nora has good food, but I find the mac and cheese a bit pricey especially considering I make my own…from scratch! And my sister’s 3-cheese mac and cheese is yummy! But I digress.

Happy Birthday Michelle Obama! You’re the mac and the cheese.

UPDATE: Another birthday. Today is also the birthday of Muhammad Ali. It was Ali that moved the “Negro” into “Blackness.” And James Brown added the punctuation. Muhammad Ali was born in Louisville, KY as Cassius Marcellus Clay. He joined the Nation of Islam in 1964 as he rose to fame and changed his name [which was the punch line – no pun intended – of his fight with Sonny Liston – “What’s my name?!”]. Ali remained steadfast to his principles by not enlisting to fight in the Vietnam war, and accepted the set backs and hits on his career and livelihood. Eventually, he regained his title and became one of the most admired sports figures in the world. Or in his own words, “The Greatest.” Ali is 69 today.