> Politics > The Next Aftershock 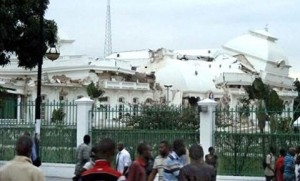 I always consider my mother the voice of “compassionate pragmatism.” We were talking about Haiti this morning and how this will have an impact on the immigration debate inevitably. And she said, “we’re going to have to bring some of them in.” I trust my mom on these matters. She’s been through some of the U.S.’s worst political, social, and financial disasters of the 20th century, and survived them all with dignity. As E-Notes says (and he and mom tend to agree on a lot of things),

Haiti is going to be in a bad state when the earthquake is no longer a major news story. Monitor how the focus will shift to the orphans of Haiti. We will let the children into the US and leave the adults behind.

I remember, and shamefully, jokes about Haitian Boat People who didn’t qualify for the “one-foot” deal that Cubans got when they arrived on Miami’s shores. I remember Susan Sarandon and Tim Robbins (when they were still the activist Hollywood power couple), calling for aid to HIV infected Haitian refugees detained at Guantanamo Bay, Cuba before presenting the gold statue at the 1993 Academy Awards. I suppose now is the time for a reunion.

And of course, there has always been Haiti’s political see saw from the historic toppling of the notorious Jean Claude “Baby Doc” Duvailier who settled in France; and the up/down vote on Haiti’s leadership from Bill Clinton to George W. Bush. It seems the U.S. couldn’t make up its mind about former president Jean Bertrand Aristide. President Bush gave the first democratically elected president of Haiti a free trip to South Africa in 2004. There are reports that Aristide is prepared to return to Haiti to assist with relief efforts.

I’ve always felt the west has never forgiven Toussaint L’Ouverture for the revolution in 1789 that ousted the French, and that includes Napoleon’s troops in 1802, and established the first predominantly black nation in the western hemisphere. I know Thomas Jefferson lost some sleep over it. From that moment on, the debate about Haiti has never been focused on what was best for its citizens or to make the country a serious, functioning partner in the western hemisphere.

After the dust and rubble are cleared Haiti will be poised for another revolution [read “change”]. And perhaps this time some compassionate pragmatism may be part of the recovery.