> People > Women > Back to the Future 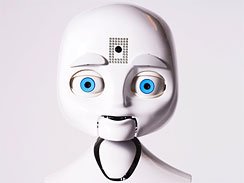 Meet Nexi. I was introduced to her via a CBS News special report on American Creativity and innovation – “Where America Stands.” Nexi was born in the Massachusetts Institute of Technology (MIT) Media Lab. She is part of an on-going project to develop robots that can help out in the home and probably a few other places. But as these robots beings become more “human” my key question is “Is the template or blueprint for human and humanity in the future inclusive of our diverse humanity?” Take Nexi. She’s white, blue-eyed. Her voice is pleasing. She expresses emotion. Does this come in a chocolate dark brown eyed model. Will one of her voice chips include “That’s alright, baby?” “It’s all good.” Or is it bad form to use “Negro dialect” in the 21st century?”

MIT calls this sophisticated class of robots Mobile/Dexterous/Social. But as we craft the 21st century, the social aspect appears to neglect the 21st centural global reality. The assumption that Nexi’s blue eyes and snow white skin represents some kind of futuristic norm is not a perspective that gives me hope about an inclusive future. With that in mind I’ll settle for the blue or purple modle.

Even in robotic sex fantasies, the norm comes in one model for the first sex robot that was unveiled at an Adult Entertainment Expo in Las Vegas. First, a marketing slip. Everyone knows variety is the ultimate fantasy. This robot’s name is Roxxxy. She has dark hair and dark eyes from what I can see from the photos. So I guess she’s the “ethnic.” But apparently Roxxxy’s all talk and no action. She provides noises and simple conversation.

“Sex only goes so far – then you want to be able to talk to the person,” according to Douglas Hines, Roxxxy’s creater.

Is Roxxxy the future of safe sex? Does she have a brother? How have the reports about the growing number of HIV infections among Black women “colored” desirability small talk.

And then there’s that discussion about what is desirable. What kind of “social chips” will be loaded into robots and from what century? I hear the Stepford Wives conspiracy theories churning.

Are robotics caught up in a new middle passage?