This morning I decided to watch the “Today” show. One of the top stories was an interview with police officer Kimberly Munley, the heroine of the Foot Hood shooting. She was credited for taking down Major Hasan after being shot 4 times herself. This morning Officer Munley was joined by her husband, father, doctor, and police officer Mark Todd who was also on the scene with her at the Fort Hood processing center. I had no doubt that Munley arrived with back up. Police usually answer the call in pairs. But apparently, Munley’s shots were not the ones that stopped Major Nidal Hassan; it was Senior Sgt. Mark Todd who brought the gunman down. It was also the first time, Todd said, he fired his weapon at a human being in his entire career.

Having learned lessons the hard way, it was theNew York Times that questioned the first Fort Hood story. (Photo below from the Oprah Winfrey Show, November 11, 2009) 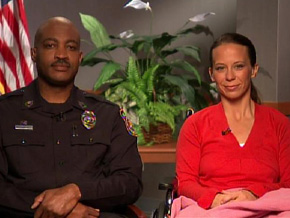 E-Notes and I had a brief exchange about narratives, expectations, and neat little story packages people seem to crave to make sense of it all, especially recently in the Fort Hood story. In the Washington Post profile of Major Hassan, he is described as a single man who never took a photo with a woman at staff holiday parties. For someone like me who’s lived a somewhat ironic life, the woman cop taking down this shooter fit neatly into my narrative ironic gender narrative box expectations. I suppose the race narrative box just wasn’t newsworthy enough, or Todd’s story was filed under “Ralph Ellison.” Maybe it was the idea of a Black man and a White woman in a police cruiser all day, answering the call…. Has Hollywood even cast that buddy film?

It’s been an interesting two weeks for news narratives.

Jon Stewart on Comedy Central’s “The Daily Show” caught another faux news report on the Fox News channel fast becoming a conspicuously inaccurate source for just about everything. The irony is “The Daily Show” admits to being fake news (it’s a tag line); but most of their content is taken from the so-called “real news.” Check out this clip of “The Daily Show’s” coverage of Fox’s Sean Hannity’s report of the November 5 anti-health care reform bill rally. Apparently DC had its most dramatic seasonal shift in a single day.

This narrative ends on a note of admittance – Fox News Sean Hannity apologized for using fellow colleague Glenn Beck’s September 12th rally footage for his report on the November 5 rally.

“And although it pains me to say this, Jon Stewart, Comedy Central, he was right. Now on his program last night, he mentioned that we had played some incorrect video on this program last week while talking about the Republican health care rally on Capitol Hill. He was correct, we screwed up. we aired some video of a rally in september along with a video from the actual event. It was an inadverdent mistake, but a mistake none the less. So, Mr. Stewart, you were right. We apologize. But by the way, we wanna thank you and all your writers for watching.”

Ironically, bloggers supporting the September 12th Glenn Beck tax payer rally included a photo of what some identified as the 1997 Promise Keepers rally. The photo is missing the National Museum of the American Indian and the National Black Family Reunion, an event happening simultaneously September 12 on the national mall with green tents prominently displayed. I guess any photo of the mall with crowds of people is just as good for any narrative. They could use an aerial photo of the National Folklife Festival. I guess 4th of July would’ve been too obvious. But you can’t beat it for flags.

When I was teaching Sunday school, I asked my group of teens did the news accurately decribe events or activities in which you were actually there or involved? They answered “No.” That was years ago. These teens are now adults. They are also in the age demographic that rarely watches “real” television news or reads newspapers.