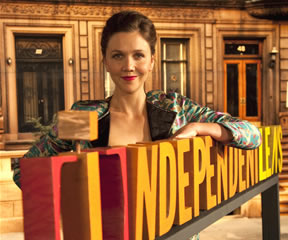 The Independent Television Service announced their new host for the 2009-2010 season of the PBS documentary series “Independent Lens.”

Actor Maggie Gyllenhaal follows Terrence Howard (who hosted for two seasons) to introduce the televised and Community Cinema presentations of “Indpendent Lens” documentaries. It was such big news even Perez Hilton posted it.

Most recently, Maggie played Rachel Dawes in the Warner Bros. box office hit Dark Knight (2008) directed by Chris Nolan and appeared in Sam Mendes’s Away We Go in 2009. Next up, Gyllenhaal will star in the dramatic film Crazy Heart alongside Jeff Bridges and in Nanny McPhee and the Big Bang with Emma Thompson.

The “Indpendent Lens” host gig is not a job for lightweights. Maggie is in some pretty distinguished company. Past hosts include Don Cheadle, Susan Sarandon, Edie Falco, and Angela Bassett.

The new season of “Independent Lens” kicks off with the film HERB & DOROTHY, the story of a postman and his librarian wife whose passion for art and their modest salaries helped them create a priceless collection of contemporary art.

THE FINAL CURTAIN FOR TELEVISION?

I actually watched last night’s Emmy Awards show almost to the end. It wasn’t a bad show. But there were moments when it felt like a “pitty party” for the television industry. After accepting her award for best supporting actress in a comedy (“Pushing Daisies), actress Kristin Chenoweth announced she was out of work. On the celebrity blogs, paramedics were called backstage when Kristin complained of a severe migraine and couldn’t open her eyes. Apparently, she was able to make the after Emmy events. Tweet her well on her Twitter account.

Jessica Lange receiving her award for the HBO production of “Grey Gardens” said the role was “a gift….and they don’t come around that often for me anymore.”

Julia Louis-Dreyfus presented an award for “the last official year of network television.”

Do I sense some professional anxiety in the auditorium?

Neil Patrick Harris, who plays against gender type in “How I Met Your Mother,” seemed perfectly at home on the stage. Awards show host is not a bad gig for Neil – what a little moonlighting can do. Not to be discouraged, Jon Stewart, said he’s willing to sing to host the Oscars. Stewart was not invited back after hosting the Academy Awards in 2006. Hugh Jackman hosted in 2008. Hmmm. Is Neil on the short list for 2009? 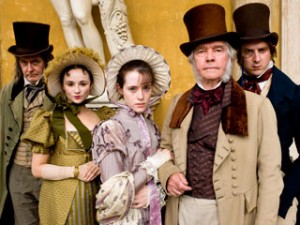 I wasn’t surprised about the “Mad Men” or “30 Rock” wins, but cheered for “Masterpiece Theatre’s” “Little Dorrit” adapted from the novel by Charles Dickens. Rebranded “Masterpiece Classic” the PBS series released several Dickens adaptations in this winter/spring. They were wonderful. “Little Dorrit” won for best drama mini-series, as well as best writing for a mini-series (veteran British adaptation screenwriter Andrew Davies), and a best direction award for Irish director Dearbhla Walsh. Walsh is directing episodes of the Showtime series, “The Tudors.”

The good news for the live network broadcast of the 61st annual Emmy Awards, is viewership was up. Last year was a bomb; this year 13.3 million Nielson audiences tuned in. The Tony Awards also got a bump up this year. Neil hosted both. Don’t say “die,” yet.

I THINK I’M FALLING
Because I don’t have cable, it probably cuts my television watching in half. I watch a few things on-line, wait for Netflix to send my DVDs of “Entourage” and other cable shows. But as for the terminally ill networks, there are actually a few things I may check out:
“The Good Wife” (CBS) – She’s not standing by her man. Too timely to miss and it’s gotten decent reviews.
“Cougar Town” (ABC) – Okay, okay. I’m trending a certain demographic.
“Glee” (FOX) – Already hooked! I’ve blogged on this one before.

Better get the popcorn going. The new season of “Gossip Girl” starts tonight! A shameful habit. 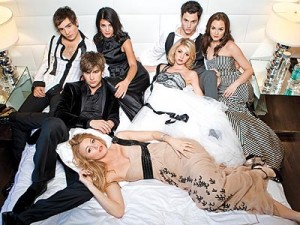