I remember my vice principle in high school patroling the halls snapping the order to “Get to Class!” Well that’s where school stops and life-learning starts.

Last night I treated myself (i.e., stepped away from the laptop to engage in life), to a workshop reading of Anu Yadav’s Classlines, a series of monologues or stories on the topic of “class” and the places where class intersects with race, income, education, status, citizenship, even fashion. I learned something about khakis.

Workshop is key to this reading. The play isn’t completed, and dare I call it drama or fiction. As I was listening to Amy Hendrick, I realized she was telling one of her own true life stories; not one collected from an interview. In her “Thug Life” monologue Amy describes a mugging that happened to her a few years ago while walking home from a get together with friends at a bar. I saw Amy at the point when most of her facial injuries had healed. But this was my first hearing of the horrible details of that night. It made me extremely sad….and angry. I didn’t care what the class or race issues were with the attacker; I was hatin’ on that dude in the moment for attacking my friend. I guess I took it personally. Amy reflects, connecting it to her own class and race issues. She’s white; the guy was black. What was he thinking? What did he see? A punching bag to get out that gentrification rage on an urban hipster? That’s not Amy. But did he know that? I needed to breath.

Class holds a grudge. Over-simplified, Class is determined by who’s holding money and who isn’t, at least that’s how it appears to work in America. The best of us work for it and inherit it. I think of Edith Wharton’s “The Buccaneers” and how the broke-*ss British aristocracy of the late 19th century tried to pump their cash flow by marrying and getting dirty with the rich daughters of the American industrialists. Money still didn’t trump lineage.

With the exception of Schuyler Cunningham’s tellings of country club fashion aesthetics and social development [delivered with the kind of dry wit that makes button downed an art] there are no Mayflower Madams, or stories about crashing a tea party at the DAR., making it in the Green Book or getting your photo in “DC Luxury.”

These DC stories grounded in a city that seems to be in flux along class lines, race lines, gender, occupation, and where they intersect and perhaps can cut you off at the knees. But it’s the lines that divide that is the pulse of Classlines.

There are some who just step on and across the line like Rose Oliphant, who fought to be re-instated in her Carrollsburg/Capper community. The public housing development was selected for conversion into a mixed-income development. Punctuate that with the new baseball stadium. Anu has worked with the Carrolsburg/Capper community before. Their relocation stories were the subjects of her one-woman show “Capers,” a few years back. 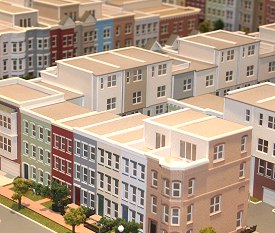 Rose’s tells her story to the camera in a short doc produced by Elle Walton. There were points where Rose’s story resembled the post-Katrina stories of the 9th Ward. Rose does get a homecoming, and I love seeing her outside her new home with that big tea cup, though many of her neighbors decided to move on or out rather than make demands on promises unkept. Or as someone put it “Step up and stay.” Unfortunatley, many people have run out of energy after a lifetime of fighting and/or waiting.

Workshop readings of Classlines are at Woolly Mammoth Theatre (641 D Street, NW) at 8 PM tonight and tomorrow, Wednesday, August 26. There is a $5 – $10 donation. For more information visit, www.classlines.net. More stories are welcomed.

Note: Some stories contain some profanity and references to violence – more suitable for mature audiences.