This is the one pilgrimage I planned during my stay in Boston in June – a visit to Concord, Massachusetts. Concord is the site of the first battle of the Revolutionary War. I’m so used to “Freedom Trails” meaning Underground Railroad stops around the Mason Dixon line and the mid-west. In New England, we’re talking about colonial America, Paul Revere, John Adams etc. 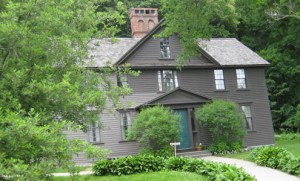 Most important, for me, Concord is the home the Alcott familiy and its most famous member, Louisa May Alcott, the author of Little Women among other writings.

What also makes Concord distinct is the other residents who inhabited the small town before and after the Civil War. Concord can be considered an epicenter in American literature. Look at its directory of residents and visitors: Henry David Thoreau, Ralph Waldo Emerson, Nathaniel Hawthorne, Walt Whitman made a visit, and Louisa May Alcott.

Concord is just 40 miles from Boston which was for some time, the publishing capital of the US before New York took over. The mid-19th century seemed a crucial time for American identity and the American narrative. The question and debate over slavery could no longer be contained. It was ours to own and to settle. It would forever define the true character of the nation. The Alcotts were part of that debate and its outcome. 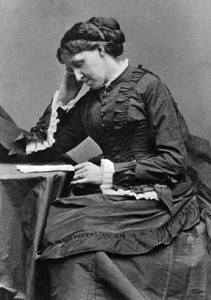 Orchard House was purchased and maintained by Bronson Alcott, the patriarch. It is where his daughter Louisa May penned Little Women. Little Women was one of the first 100+ page books I ever read. You can reach Concord by commuter train from Boston’s North Station. It’s a 90 minute ride. We had no way to get from the train station to the Orchard House considering my mother walks with a cane, so we called Sunshine Cab, the only cab company in Concord. Larry picked us up at the station and dropped us off at Orchard House pointing out the Alcotts’ neighbors on the way – Henry David Thoreau’s House and the Concord Museum. It was Larry’s birthday, so we gave him a decent tip.

In the Orchard House Louisa and her sister May are definitely the most outstanding personalities. The tour was led by two enthusiastic young women who told us the only men who come on the tour are usually fathers and boyfriends dragged by their dates. You begin with a video introduction in May’s small studio.

If you’ve read the book, the two older March sister’s paired off with their younger siblings as follows: Jo (Louisa)/Beth (Elizabeth); Meg (Anna)/Amy (May). But inside the Alcott House, one finds the creative soulmates were in reality writer Louisa (Jo) and her younger sister May (Amy), the artist. By the time the Alcott’s moved to Orchard House, Elizabeth (Beth) had already died of heart failure. Her piano is displayed in the parlor where Anna, the inspiration for Meg in the novel, was married. The frugal Anna purchased a grey wedding gown, which could be worn more than once. The dress is laid out on the bed in Louisa’s room.

Based on what I saw in the house, the Alcotts were a “free-to-be-you-and-me” kind of family. May’s drawings can be seen on the walls of her room as well as her artist studio built for her by her father on the first floor of the house. (No photography was allowed). Against the cultural norms for women, Bronson Alcott built a writing desk for his daughter Louisa in her room. Their mother Abba, also encouraged her daughters’ muses.

But there was some method to this freedom which was greatly influenced by the patriarch Bronson Alcott. You can read more about the self-made philosopher and intellectual in John Matteson’s dual biography of Bronson and his daughter Louisa titled Eden’s Outcasts. The philosophy school Bronson Alcott built on the Orchard House property, still stands. An odd wooden structure, but sturdy. Classes and lectures still continue.

In the original, Louisa May Alcott ended Little Women with Meg’s wedding. She believed the March sisters could get along without the marriage and husbands. But Louisa’s publisher felt differently. Little Women, as we know it today, is actually two books from an author who’d rather write gothic blood and gore than chick lit. However, the book’s success afforded Louisa May Alcott some decent digs in Boston and art lessons for her sister May in Paris who eventually taught the sculpture Daniel Chester French creator of the statue inside the Lincoln Memorial in Washington, DC. [Below: “Negresse” by May Alcott] 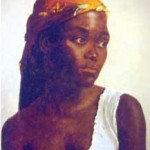 After the tour, I felt I’d been living in the shadow of the Alcotts all my life, their values, dreams, lifestyles. Bronson Alcott’s innovations in education, though strange to his contemporaries, survived his times: recess; adult education or life-long learning; arts education; field trips.

But after reading Matteson’s book, I’m hoping my life doesn’t resemble the more detailed biography of the Alcott family. Before Louisa became a celebrity, the family lived in practical poverty from hand-to-mouth. Life was constant struggle, economically, emotionally, and physically. Despite everything, the family was undeniably devoted to one another. Perhaps in the Alcotts’ eyes, family was their greatest asset and measure of success.

A new documentary will premiere on the PBS series American Masters December 28 on the life of Louisa May Alcott. This documentary, produced and directed by Nancy Porter, has a book tie-in with a new biography, Louisa May Alcott: The Woman Behind Little Women by Harriet Riesen. You can learn more about the film and the book here.

Louisa May Alcott from Nancy Porter Productions on Vimeo.

More clips can be found here.

We didn’t have time to get to Walden Pond or the Sleepy Hollow grave yard, the inspiration for Washington Irving’s The Legend of Sleepy Hollow and where many if not all of Concord’s famous residents, including Louisa May Alcott, are laid to rest.

This is where I step off the Alcott trail and return to Concord.

Larry returned to pick us up just down the road at the Concord Museum. He recommended Sorrento’s Brick Oven Pizza for lunch which is a few doors to the left of the train station. It’s a hang out for local teens but on the same level as the old malt shop back in the day (no beer and wine served). The pizza’s pretty good too. Bye-bye regular industrial ovens. I’m now hooked on brick.

For more information about the Concord Museum, visit http://www.concordmuseum.org/