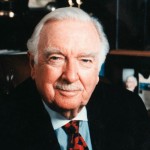 As anchorman of the CBS Evening News, I signed off my nightly broadcasts for nearly two decades with a simple statement: “And that’s the way it is.”

To me, that encapsulates the newsman’s highest ideal: to report the facts as he sees them, without regard for the consequences or controversy that may ensue.
Walter Cronkite
from “Telling the Truth About the War on Drugs”
Huffington Post, March 1, 2006

Gwen Ifill signed off from “Washington Week” with the announcement that radio and TV journalist and former CBS news anchor Walter Cronkite had passed away at the age of 92.

There are two people I credit for my interest in television, writing, and journalism: my Uncle Johnny and Walter Cronkite. In some ways uncle Johnny resembled Walter Cronkite, I suppose in that wise life experience, reserved sort of way. Uncle Johnny visited all 48 states on the US mainland via railway freight cars and the U.S. Army. Walter Cronkite went to Europe to cover the war in the 1940s. In the 1960s he went to Vietnam. This was before journalists were embeded. You didn’t get a hall pass from the Pentagon when you went on assignment with the intention of getting the real story.

When Cronkite returned from Vietnam he summed up the story in a commentary that shook the foundations of the war:
…it is increasingly clear to this reporter that the only rational way out then will be to negotiate, not as victors, but as an honorable people who lived up to their pledge to defend democracy, and did the best they could.

Uncle Johnny watched the CBS Evening News with Walter Cronkite religiously. It didn’t matter what I was watching on television. At that 6:30 hour, uncle Johnny would step in front of the television and turn the knob to the CBS affiliate. And there was Walter Cronkite. For some reason, I accepted this ritual and eventually I started to pay attention to the news. I had no idea what I needed to do to work in television at that time or that these jobs were even attainable and not bestowed upon a lucky few. But I was hooked on Uncle Wally. I even saw his last broadcast in 1981. I remember getting a call from his office saying that he was picking up his mother en route to a live broadcast when I was working in public television.

The oracles of my childhood are quickly fading into memories. Perhaps that’s television’s blessing. The availability of the replay.