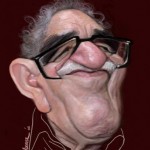 He had previously admitted that 2005 “was the first [year] in my life in which I haven’t written even a line. With my experience, I could write a new novel without any problems, but people would realise my heart wasn’t in it.”
Gabriel Garcia Marquez for the Telegraph UK

I won’t be mad with Gabo if he’s decided to put down his pen. Look at the body of work–not just the honors and prizes–in his 81 years. In 2000 I went to Havana for the film festival anticipating to meet him in person. (He was known to be a regular at the festival.) A group of Mexican women on a BYOT (bring your own tequila) vacation from their husbands told me Gabo wouldn’t make it. He had been ill. They poured me a drink and continued their girls night out on the patio of the Hotel Nacional.

A few years later I met his most recent English translator, Edith Grossman, who wrote the latest translation of “Don Quixote.” I praised her work especially for the translation of Love In the Time of Cholera. I remember enjoying the last pages of that novel with a small box of chocolates.

It was through Marquez’s writings that I came to understand Colombia and “How we got here” long before the here is where we are today. In recent years, I’ve picked up a novel or a book of poems ahead of a history book when I want to understand a country or culture that’s not my own. What do people value? How do people express, live, and love? What are their stories?

No, I won’t be mad if Gabo doesn’t write another novel. There comes a time when a writer needs to spend more time living.