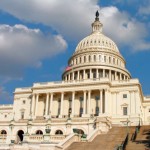 For someone like me who grew up in D.C. neighborhoods, Capitol Hill was like another world, an island unto itself. That was called “Washington,” we lived in “D.C.” The feeling from the Hill seemed to be mutual and the divide has widened over the years.

My sister once described official Washington as a college campus: the House of Representatives offices were the underclassmen dorms; the Senate the upperclassman dorms; the Capitol was the student union; there’s the President’s House (obviously); the Library of Congress – well, the library; the departments are…the departments; and folks like me who live here are the townies.

I made a promise to myself to move away from my us vs. them attitude about the Hill and start making nice, making friends, welcoming the Hill to my neighborhood, wear a cardigan like Mr. Rogers. For the past several days, this townie had to storm the Hill on official business. It wasn’t my first trip, but definitely my first with my new attitude. But I couldn’t help but take a few cultural notes while carrying out my official duties:

1. The only newspapers and print media on coffee tables and reception desks were insider-type Hill publications like Congressional Quarterly, Roll Call, Politico, maybe the Washington Post. CSPAN would be playing in the background. I would’ve felt better seeing more hometown newspapers in the Representatives’ reception areas. The display of Hill publications indicates the conversations are going in circles.

2. People are very polite and nice on the Hill. Since I wasn’t there to push policy or ask for money, people seem to be pretty cool. I made sure I didn’t have a coat under my arm.

3. I find it odd that the Representatives look like they go to tanning salons and get facials. Here are 50 – 60 year old men men (in this case) who look more buffed up facially and hair wise than I do. I was wearing make up. The women look rather normal with better suits than I own. I always said Capital Hill and Hollywood shared a mutual culture and envy. The lawmakers envy Hollywood’s celebrity and glamour; Hollywood people envy the lawmaker’s power.

5. The Hill has gone green! Recyclable products in the cafeteria and in catering. That’s a good thing.

6. You don’t have to go home again because everything you need is there. There’s really no reason to leave the Hill except to see the sun or your family. You have a bank, post office, gym, food, barber, salon. No book stores or bars. Maybe there is a reason to leave campus.

7. This may be slightly inaccurate, but I’ll say it anyway — the Republicans have more interesting stuff in their offices than the Democrats – at least memorable. Rep. Don Young of Alaska had the pelt of a polar bear on the wall. It’s the first thing you see from a distance as his office faces a hallway. Now we know what AK’s lawmakers really think of polar bears. Another Rep had pictures hanging like tiles all over the office walls even above the doorways. You could spend a good 30 minutes just looking at the pics.

8. Flags are aesthetically pleasing in the Houses of Congress. Every member has up to 3 flags outside their office: the American flag, their state flag, and maybe a MIA Vietnam veterans flag.

9. There’s a strict Capital policeman who gives out tickets for jay-walking. I saw this guy in action. Woof!

A glimpse of my official business: 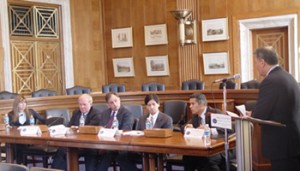 Apparently downloading is cutting into profits for media companies like Viacom, Time Warner, and others. Some partnerships have been formed between content providers and platforms like Google to at least provide a customer service on line for downloading content like hulu. But it appears the genie is pretty much out of the bottle. How do you tell people “bad, bad, bad” taking content that’s copywritten and not just free for the taking? Do you slap the cuffs on someone who clicks the download button or has that pirate DVD sitting on the couch?

How do you change a culture that’s now accustomed to convenience and “file sharing”? It seems the answer is to frame it in “What are your kids downloading?” I’m still trying to visualize the downloading audio or video content conversation taking on the same tone as the say “no” to drugs talk. Illegal downloading is computer crack? Will the White House appoint an intellectual property coordinator? Will fines be applied to people who download copywritten content based on their IP address? Are the pirates really operating as gangs and cartels peddling DVDs on the “blackmarket”? What about the artists and royalties? Esai Morales represented the artist (non-techie) perspective. Where are the royalties? Should there be some sort of utility tax? And what about the advertisers who are asking writers to embed product into the script? How are the actors compensated especially if that means no commercial deals. Something’s gotta give.

March 31, Disabled American Veterans, Iraq and Afghanistan Veterans of America, and ITVS hosted the women of Team Lioness and filmmakers Meg McLagan and Daria Sommers for a special event featuring a clip from the documentary film, LIONESS, and a Q&A. The room was packed. I didn’t get to see anything inside once the program started, but it was special seeing the enthusiasm on the faces of the people when they came out of the room.

It was great meeting the women from the film the night before – the first women combat veterans. We had some beer, wine, and food in a casual meet and greet. On duty were Spc. Shannon Morgan, Spc. Rebecca Nava, Staff Sgt. Ranie Ruthig, Maj. Anastasia Breslow. Policy still dictates that women can’t be assigned to combat duty. In Iraq and Afghanistan it probably can’t be avoided in all circumstances. However, because of the policy, the women’s military records cannot reflect active combat duty. That makes it difficult to get full VA benefits for combat-related ailments and conditions including post traumatic stress disorder (PTSD). Two of the women are still on active duty; two are in civilian life. See the Fox 5 clip. Each woman received a flag from House Speaker Nancy Pelosi’s office. These flags flew over the Capitol dome in each Team Lioness woman’s honor before their arrival.

And the trees on the Hill have bloomed. Who’d a thought.