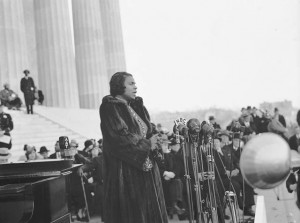 There’s a verse in the New Testament – “All things work together for good….”

This Easter Sunday, April 12 at 2 PM, mezzo soprano Denyce Graves will give a free concert on the steps of the Lincoln Memorial joined by Sweet Honey in the Rock, the Washington National Opera, and the Chicago Children’s Choir. Graves will perform Anderson’s original program from 1939. Had there not been an incident 70 years ago at the DAR’s Constitution Hall, this event may have just been another free concert in the park, like the Beach Boys on 4th of July; or a stepped up church revival to resurrect the sin-sick soul.

In 1939, the acclaimed contralto Marian Anderson was scheduled to give a recital in the Daughters of the American Revolution’s (DAR) Constitution Hall in Washington, DC. Anderson had already made her Carnegie Hall debut, performed in London, Berlin, and was touring extensively throughout the U.S. It was the segregated nation’s capital that brought Anderson’s whirlwind tour to a crawl.

She was able to perform on the Washington church circuit, but her manager thought it was time to move up into the city’s professional venues. They booked Constitution Hall in the Foggy Bottom section of the city, not far from the White House. When the DAR discovered Anderson was African American, they immediately applied their “No Colored” policy saying the hall was unavailble, already committed, and when alternative dates were suggested, the DAR said they were unavailable on those dates as well. It became clear to Anderson’s manager and to the artist herself, that the DAR simply would not allow Marian Anderson to sing in Constitution Hall.

The news spread through official Washington. First Lady Eleanor Roosevelt caught wind of it and wrote a letter to the chairwoman of the DAR resigning her membership. She published her decision in her newspaper column “My Day.” Even the DC Board of Education came under investigation when they refused to allow Anderson to use one of their facilities.

Anderson may not have planned it this way, but by performing at the feet of Lincoln, her Easter Sunday concert became a powerful symbol for civil rights that would crescendo for the movement in the years to come. Twenty four years later, Baynard Rustin would book the steps for a March on Washington attracting nearly 500,000 and setting the stage for an historic speech delivered by Martin Luther King, Jr.

In 2005, the DAR headquarters hosted the first-day-of-issue dedication for the US Postal Service’s Marian Anderson stamp. The DAR’s President General Merritt Wagoner welcomed guests with the following:

It is most fitting that we gather in Memorial Continental Hall at Constitution Hall, the place which historically represents a sad chapter in our country’s history and in the history of DAR. We deeply regret that Marian Anderson was not given the opportunity to perform her 1939 Easter concert in Constitution Hall but recognize that in the positive sense the event was a pivotal point in the struggle for racial equality.

Ms. Anderson’s legendary concert on the steps of the Lincoln Memorial will always be remembered as a milestone in the Civil Rights movement. The beauty of her voice, amplified by her courage and grace, brought attention to the eloquence of the many voices urging our nation to overcome prejudice and intolerance. It sparked change not only in America but also in the DAR.

I stand before you today wishing that history could be re-written, knowing that it cannot, and assuring you that DAR has learned from the past.

Denyce Graves was the featured performer at the dedication. I was there sitting two seats away from Kathleen Battle. Graves received the Marian Anderson award from the artist herself in 1991. (Anderson died at the age of 96 in 1993.) Graves is also a native Washingtonian and attended DC Public Schools as well as Oberlin Conservatory and the New England Conservatory of Music. I’ll never forget the day Denyce told me she was leaving Oberlin to continue studying with her voice teacher who was retiring from Oberlin but taking on a new gig at New England.

Marian Anderson did perform in Constitution Hall in 1942 and several times after.

The Lincoln Memorial has become one of the most sought after concert venues in the city when someone has something meaningful to say. Hopefully the weather agrees. Had Anderson not laid her burdens down at the feet of the “Great Emancipator,” the memorial may have just been another big white statue of a President on the mall.