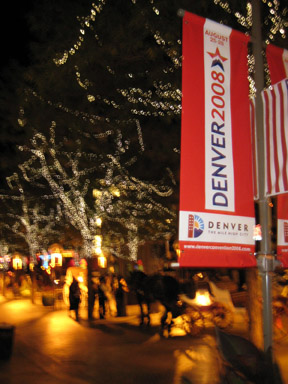 Last night we took a bus from Boulder to Denver. Yes, I’m out here in Boulder 30 miles out. Sign of how difficult it is to get a room for the convention close to Denver; but that may change later. The fact is there is bus service from Boulder to Denver. $4 each way. I think the Marc from DC to Baltimore is cheaper. However, those of us in the outerlimits of the convention, can get to downtown Denver as the very nice women at the DNC Convention table here in the Boulder hotel tells us.

But the bus ride was worth it even after spending 12 hours getting here. My neighbor who lives down the hall from me got on. I haven’t seen him in a long while. A woman from San Francisco was our ticket for party crashing. We intended to go to the California state party but somehow ended up in New York. However, I did come away with an interesting souvenir:

There’s a lot of people watching. I’m not just talking about the beefed up security with packs of impressively armed police officers and homeland security types every two blocks. I mean people watch you. I guess to make sure you’re not someone that should know, need to know, or want to know. I’ve been warned about these political events.

But Denver’s going out of their way for the convention. Let’s see what this looks like in the daylight.