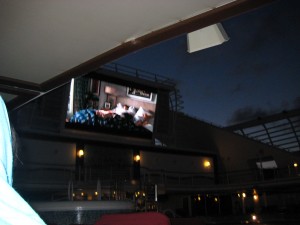 Over the vacation week, I saw a number of movies en route on land and sea. Some were forgettable (“Rush Hour 2,” “Did You Hear About the Morgans?”) but a majority were worth being a coach potato for. That’s allowed during vacation isn’t it? The Princess Cruise line exhibits films on the top deck’s big screen as well as in house cable. I noticed these films programmed to thematically tie into our destinations along the New England coast and Canada.

After a stop in Newport, RI, we headed towards Boston. 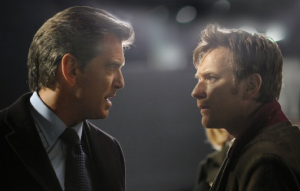 The Ghostwriter (2010) Roman Polanski’s last (or last) film based on the novel by Robert Harris who also penned the adaptation. Ewan McGregor plays “the ghost” aka writer. He has no other name. He shouldn’t. He can’t. That’s part of the deal when he takes up where the last ghostwriter left off. Actually, the previous ghost drowned while working on the memoirs of disgraced former British PM Adam Lang played by Pierce Brosnan. Lang is living in luxurious exile on the coast of Massachusetts while being accused of war crimes (i.e. torture) back home. The ghostwriter realizes this assignment will be more than just copy editing. True to Polanski form, the women are complicated, emotionally tortured, secretive, and seductive to the new man in the room. Lang’s wife, Ruth, is played by Olivia Williams. Lang’s mistress/administrative assistant is played by Kim Cattrall (Samantha in “Sex and the City”) Considering Polanski’s state of affairs, the making of this film was more than likely equally complicated and tempting. Usedom, an island in the Baltic was used as a stand-in for the coast of Massachusetts and a unit was sent to film on Martha’s Vineyard minus Polanski. But Germany was also a stand in, as Brosnan was a stand in for Tony Blair. What is this film saying about the U.S./U.K. relationship at the height of the Iraq affair. Complicated, emotionally tortured, and seductive.

On the way to Canada… 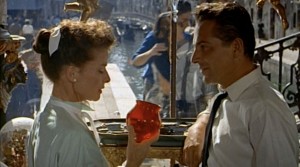 The romance channel had a few oldies but goodies. A Princess cruise ship was the setting for the television series “The Love Boat.” Summertime (1955) with Katharine Hepburn as Jane Hudson and Renato Rossano Brazzi as Renato de Rossi. Jane is a not so young single woman who takes a solo trip to Venice that turns out not to be so solo after all when she meets Renato, a handsome antiques dealer. For our trip, we only had a few hours in each destination. No time to shop for antiques or antique dealers. “Summertime” makes you feel like you’re in the real Venice, nooks, cracks and all. The film was directed by David Lean with cinematography by Jack Hildyard. There’s no special set ups, no very few, if any stand ins or rearrangements. And like a good vacation, Jane comes away with….

St. John, New Brunswick…I saw a bust of Queen Victoria above the doorway inside the Anglican Church in St. John.

My favorite of the week was Young Victoria staring Emily Blunt as Queen Victoria. The story was about the personal and public politics of England’s longest serving sovereign in the year she ascends to the throne. If her uncle had died before his niece turned 18, Victoria would’ve been under the power of a regency. As it is, an ambitious aide to her mother tries to force her to sign an order giving him authority until Victoria is 25 years old. Apparently teen Victoria knew the perks of power in her own right but she needed a trustworthy ally. Enter Albert who not only understands the game but puts his lady’s happiness and well being over the perks of the throne. Lucky Victoria finds true love and a partner (without a hidden agenda) in one package. Who needs a power struggle in a marriage.

I’ve become quite a fan of Emily Blunt since “The Devil Wears Prada,” an imperfect movie that I repeat watch from time-to-time. Every actor has his/her “Did You Hear About the Morgans?” But for now Blunt’s churning along, building visibility, credibility and a fan base. Let’s hope more roles worthy of her talent will be added to her portfolio.

On the way back to New York…actually Brooklyn. One of my screwball favorites.