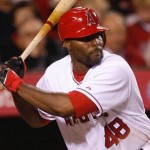 First this…
“As African-American players, we have a theory that baseball can go get an imitator and pass them off as us. It’s like they had to get some kind of dark faces, so they go to the Dominican or Venezuela because you can get them cheaper. It’s like, ‘Why should I get this kid from the South Side of Chicago and have Scott Boras represent him and pay him $5 million when you can get a Dominican guy for a bag of chips?’ … I’m telling you, it’s sad.”
Torii Hunter, LA Angels
Source: Huffington Post

Then this…
“What I meant was they’re not black players; they’re Latin American players. There is a difference culturally. But on the field, we’re all brothers, no matter where we come from, and that’s something I’ve always taken pride in: treating everybody the same, whether he’s a superstar or a young kid breaking into the game. Where he was born and raised makes no difference.”

LA Angels center fielder Torii Hunter proves my point that everyone, including African Americans, can use some diversity training. And yes, culture can be complicated. “Negrito” means dear one. Literally it’s “little black thing.” I don’t always get an A+ either. There are differences culturally, regionally, class, education, etc. Treating someone “the same” is, in my opinion, basically saying “I don’t see you.” Avitar moment? Treating someone with respect and recognizing their inherent worth for who they are is close to the place I’d like to be. We’re not in Kansas anymore.

Please forward Mr. Hunter the following YouTube videos produced by the Afro@Latin Forum based in NYC. They are asking Latinos of African descent to check two boxes on the U.S. Census. Look up Afro-Latino. Some embrace it; some don’t. Latin America has race issues too. Maybe this effort to stand up and be counted is, like most identity movements, a way to be seen and heard.

As for Torii, if you’re brothers on the field, what happens after the game?