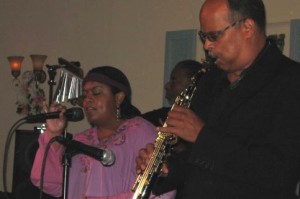 In John Lennon’s “Beautiful Boy” song he writes “Life is what happens to you while you’re busy making other plans.” Or lately, the adage resembles the Frank Sinatra tune “That’s Life.” One life lesson is there’s really no excuse for not practicing your art if that’s what you want or love even in a environment where the marketing plan or “gimmick” is more essential than the talent.

I’ve always believed in the vocal talent of Dawn E. Robinson. [The “E.” was for Eliza until she adopted her late father’s name as her professional signature.] Dawn is one of those lights under the basket. Or maybe it’s a “waiting for Godot” – someone has to come along to recognize or find your talent. But this is an ADD world. The elevator pitch is down to a twit. Not everyone gets a “Susan Boyle moment.” Even Boyle, in some ways, fits a marketing plan and gimmick with the familiar narrative of “A Star Is Born.” It may take a lifetime with its baggage of bad breaks –losses, foreclosures, and other contemporary spills — to make an artist recognize what he/she really loves and where she/he needs to be to get centered again.

Dawn’s tracks cover Blues Alley, opening for Nancy Wilson, the festival circuit, performing with gospel great Richard Smallwood, backup vocals for Maysa (of Incognito fame), and a ton of other gigs live and in studio. Dawn will be giving her first full concert in eight years Sunday, June 27 at 4 PM at the Shiloh Baptist Church (1500 9th Street, NW) in Washington, DC. For many, the sanctuary brings the music back to mission. The concert will be a mix of sacred and secular music. How did Dawn get away with this in the Baptist church? That’s a question for our Eclectique Interview. 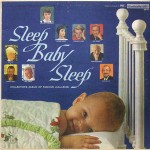 When did you realize you wanted to be a professional singer? When were you sure of your ability?
I always wanted to sing – I never wanted to do anything else. I still have the LP (remember those?) “Sleep, Baby, Sleep” that my folks played when I was in the cradle. It had singers on it like Rosemary Clooney, Bing Crosby & Diahann Carroll. I was told that I sang along with the record (not with words, of course) and that I had a fit if they played Side B before Side A.

As for when I was sure of my ability, I don’t know – how do you know you can breathe? I just knew it was there. The question in my head when I was a kid was always when would I get to sing somewhere other than in the house basemen. Interestingly enough, I used to try out for solos all the time in catholic school and never got chosen. I tried out for the talent show when I got to Alice Deal Jr. High and Lois Nicholson was handing me solos all the time.

What’s on the program for the June 27th concert?
Well, I hate the cliche “there’s something for everybody” but there’s something for everybody. I have some classical pieces, spirituals, familiar hymns, a couple of show tunes and contemporary gospel songs, some of which are originals. The two show tunes I’ve wanted to do for a really long time, but never got the chance before.

There’s a lot of uncertainty right now. The past two years have been the most challenging of my life. So, the songs I chose are all reminders to everyone – and myself – to hold on, hang in there and don’t give up. That, too, sounds cliche but faith is all we’ve got – without it, there’s no reason to get up everyday.

How did you negotiate bringing secular music into the Baptist church sanctuary?
I didn’t really negotiate anything. The concert is part of Shiloh’s “Music Appreciation Weekend” so I was told that I could do different styles of music that I like to do. I’ve attended a couple concerts at Shiloh before that included secular pieces.

Who’s on the program and why?
Everett P. Williams, Jr. is an awesome pianist and accompanist. We’ve known each other a long time – I had a featured spot in one of his concerts at Shiloh a few years ago – but this is the first chance we’ve really had to work together. He will accompany me for the first half of the program.
Dan Reynolds is ALWAYS the first call I make for a keyboard player; we’ve worked together in various bands, including his own, since 1985. He’s not only a great keyboardist and composer, he’s a great listener which is essential for a singer. Blues Webb will be on drums. He’s a versatile drummer. He’s done church gigs, jazz gigs, go-go, funk – Blues can play it all.
James “JT” Brown is on bass. I’ve heard JT during church services, but this will be our first time really working together. He has worked with a lot of folk and gospel artists. All of these cats are versatile players.

When I have the opportunity to call other singers, I always call Donna Redd (met at Shenandoah) an awesome singer who has done alot of stage musicals and cruise line shows Gwen Outen, one of my “students” when I tried my hand at vocal coaching;
Branita Griffin-Henson (from Metropolitan Baptist Church), a great classical soprano. Branita sang a solo at my mother’s funeral

I’ll also have Karen Arey Johnson on vocals. We haven’t had a chance to sing together since Ellington, so I’m really psyched to have her on board. And I have Psalm 150 who are fabulous.

When did you form Psalm 150?
It’s kind of a long story. Most of us sang in the same church choir years ago. But you know, things happen, people move on, whatever. In October 2006 I was in the awkward position of having to form a choir for my mother’s funeral. After a SOS phone call to Thomas Tyler (Shiloh’s special assistant to the pastor for worship) and some emails went around, these singers came back together – it had been something like 6 years since we had sung as a choral unit. But they had my back that day and I am forever grateful to them for that. In 2007, Johnny Butler III got us all together again, added a few more singers and named us Psalm 150.

Now, it’s impossible for me to name just three secular artists! I mean, I could name you three right now and name you another three an hour from now and a totally different three tomorrow. But the solo artists I gravitate most to; I can count on to put a smile on my face when I hear them; that make me sit up and take notice, I’d have to say Michael McDonald, Rachelle Ferrell and Sarah Vaughan. For groups, I’d have to say Earth Wind & Fire (with Maurice White on lead vocal) and The Temptations – the original lineup and when Dennis Edwards joined the group. 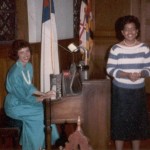 Who was your favorite vocal teacher or is that a touchy question? Why?
It is a touchy question – LOL. You don’t really want to say one teacher was better than the others. I think there’s always a political process to matching vocal students with teachers; you don’t always get the one that’s best for your voice. But I will say that my voice grew the most with Linda Burgard at Shenandoah. That’s partly because she didn’t prohibit me from singing genres of music other than classical. I didn’t have the artistic tug-of-war with her that I always had with my previous teachers. I was the girl singer with the big band at Shenandoah and worked on weekends with some of the jazz faculty. She attended a few of the gigs – of course she had a few notes on how I might have approached a certain note or phrase better – but overall she said that she liked what she heard. 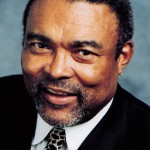 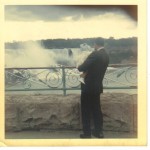 When I first arrived at Oberlin, he heard me sing at Mt. Zion Baptist Church in town, introduced himself after service, and asked me if I would be interested in singing with jazz ensemble. I had to tell him I was a voice major in the Con but I was flattered that he asked me. He said he understood and told me the last voice major to sing with him was asked to leave the Con. So, I was just a jazz fan for all of First Semester. But my father passed away just before Second Semester began and I needed a creative outlet to deal with that. I found myself walking up to Wendell’s office, knocking on his door, and all I said was, “Um… My father just died. So if you still want me to sing with you, I’m game.”

The first song Wendell gave me to learn was Horace Silver’s “Song for My Father.” He put me in jazz ensemble. Though he was certain that none of the voice faculty would ever come to a jazz concert, he listed me on the program as “Percussion.” I had my little percussion things to play inconspicuously in the back, then came out front, sang my set and went back to playing percussion. It was a hoot! Wendell saved my life.

[Editor’s note: Dawn transferred from Oberlin to the Shenandoah Conservatory of Music in Winchester, VA where she majored in Arts Administration, was able to continue classical study and perform non-classical music. She also won first place honors for senior women in the Virginia Chapter of the National Association of Teachers of Singing classical voice competition and the Shenandoah Jazz Performance Award.]

They say “practice makes better.” Even when you don’t have a gig or concert, how do you stay in vocal shape?
I sing a lot in the car – I love to drive and sing. I collected my favorite songs to sing on my iPod playlist and sing along with it in the car. I recently discovered that my apartment has decent acoustics. But I can sing as loud as I want to in the car.

If someone were to give you a record deal today, and the choice between gospel and secular music, which would you pick?
I would choose secular music – I like to move my neck too much. Seriously though, I’m a lot freer singing secular music. Gospel music is about ministry. When I’m singing, I’m thinking more about the lyrics and what they might mean to somebody out in the congregation. And there are certain gospel songs I’m just trying to get through myself without totally breaking down. With other genres – contemporary jazz and funk, especially – I can listen more to what the guys are playing around me and sing off of that. It’s just more fun.

What do you want the congregation to take away with them when they leave Shiloh after the concert?
I hope everyone is inspired and uplifted; the congregation, the other singers, the band, me too. I hope we all feel a little better about our situations when we leave than we did before we came in. I hope we all feel like hanging in there and holding on for a while longer.