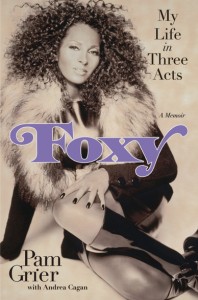 Pam Grier‘s going to be in the neighborhood. She’s making a DC stop at Busboys and Poets (2021 14th Street, NW) June 13th at 6 PM to discuss and sign her new book Foxy…My Life In Three Acts. The title of the second act makes me chuckle – “Fros and Freaks.” This comes in between “The Early Years” and “Finding the Balance.”

A little backdrop on Pam Grier: Pam Grier started her career in the early 1970s, starring in a string of moderately successful women-in-prison films and blaxploitation films, and has generally remained in the public eye, starring in feature films such as Coffy, Foxy Brown, and Jackie Brown. After taking a short break from Hollywood, Pam returned to film in the 80s, (Fort Apache the Bronx, Something Wicked this Way Comes, and Above the Law); and made television guest appearances on “Miami Vice” and “The Fresh Prince of Bel Air.” Pam also played Kit Porter on the controversial hit show “The L Word” on Showtime. She occasionally guest-stars in “Law & Order: Special Victims Unit,” where she is a recurring character. She spends her free time on her ranch in Colorado.

While at Busboys…, be sure to order the salad.