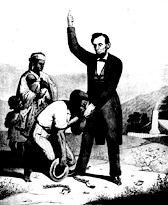 I laughed when I read this on E-Notes. Apparently, we stumbled across the same article in the Washington Post yesterday. I was tempted to title this post “Washington, DC Mayor Proposes Making Freedom Optional to Trim City’s Budget Deficit.”

In an effort to trim and balance the budget, D.C.’s Mayor Adrian Fenty is proposing making D.C.’s 4-year-old Emancipation Day Holiday an optional leave provision. Essential personnel like police, fire fighters work on the “Holiday rates.” This will save the city a$1.3 million a year. In times when $1 billion dollars is now somebody’s $1 million — I can’t say I blink too fast these days.

There’s also that school of thought that there are too many “Black Holidays.” Is this the same school of thought that believes Black is a different planet? Civil rights and human rights aren’t just a “black thing.” The signing of the Emancipation Proclamation ended all forms of slavery for all people — that included indentured and forced labor. Follow that up with child and other labor issues. And in the global economy, there still exists forms of slavery that an Emancipation Day can shed some light on. Underground economies are also at work traffiking human labor legally and illegally. Think prison industrial complex. Watch “Gone With the Wind” if you must (I won’t be mad), and see Scarlet hire her chain gangs to do the work Negroes had to be paid to do.

On the subject of Slavery today, here are “10 Shocking Facts” from the site MatadorChange about national and international slavery from 2008:
1. There are more people in slavery now than at any other time in human history.
2. The value of slaves has decreased.
3. Slavery still exists in the US.
4. Slavery is hidden behind many other names, thus disguising it from society.
5. The least known method of slavery is the most widely used. (Bonded labor)
6. Human trafficking has recently been described as “the fastest growing criminal enterprise in the world.”
7. To buy all bonded laborers out of slavery could cost as little as $40 per family.
8. Free the Slaves believe it is possible to end all slavery within 25 years.
9. Many slave-produced goods might reach your home without you realizing their origin.
10. Your actions affect global slavery.

President Abraham Lincoln signed the bill freeing ALL enslaved people in Washington, DC 9 months before the Emancipation Proclamation became the law of the land. 2009 is the Lincoln Bicentennial. Did the clock run out on Lincoln too?

As a footnote, here’s a video from NBC’s Today Show in 1997 featuring Loretta Haynes, a descendant of the African slaves at George Washington’s Mt. Vernon plantation. I attended church with Mrs. Haynes and her family years ago. She was instrumental in bringing Emancipation Day to the pubic’s attention here in Washington, DC.