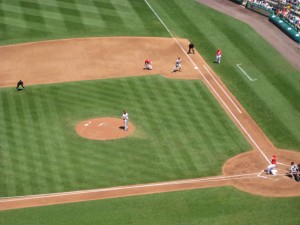 Anyone who knows me know I’m not a sports fan in the sense of spending Sundays glued to the tube, checking stats or scores unless it’s a championship final. I do get into the culture and theatrical elements of the game. Sunday, I attended my first baseball game in many moons at Nationals stadium. The Washington Nationals lost to the San Francisco Giants miserably. But game outcome did have any effect on my enjoyment of the ambiance and ballpark food. My Ben’s Chili Bowl hot dog and beer really hit the spot. The debate still continues or what was lost and gained for DC residents in bringing major league baseball back to the city with taxpayer money. But I have to say, that Nationals Stadium sure is real pretty! 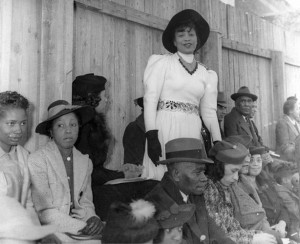 My field trip was all in preparation for a project I’m working on with WHUT-TV Howard University Television — to collect Washington, DC baseball stories for an oral history to be included in Howard University’s American Archive repository. I’ve got my Zora hat on (photo: Zora Neale Hurston in NC at football game – credit Alex Rivera). I’m learning DC has a very unique baseball history (Negro Leagues, college and little leagues, the majors, the hearings) that’s had an impact on baseball as we know it today. But the only way to find out is to ask around.

WHUT’s oral history project is one of the outreach activities leading up to the WHUT broadcast of The Tenth Inning, Ken Burns’ follow up to the 9 inning/partBaseball series that aired on PBS in 1994. In other words, The Tenth Inning picks up where BASEBALL left off.

But for Washington, DC, our tenth inning marks a new beginning for baseball. How did we get here? You tell us. Bring your baseball story…
– Thursday, July 15 from 4 – 6 PM at the BatterUp Foundation/RBI event – Banneker Field (Georgia Ave. across from Howard University), or
– Saturday, July 31 from 10 AM to 1 PM, WHUT studios (email info.whut@gmail.com or call 202-806-3059)