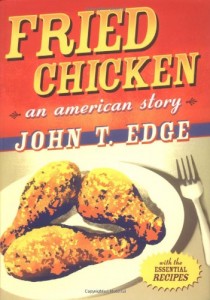 John T. Edge’s Fried Chicken: An American Story has to be one of the best pleasure reads I’ve had all year. Edge is director of the Southern Foodways Alliance, educator and contributor to the New York Times, Savour, Gourmet, Oxford American. For Fried Chicken, Edged traveled the country (north AND south) collecting stories and configuring recipes for infamous fried chicken. Some recipes will go to the grave.

FOR MY SON, JESSE CLIFTON EVANS EDGE.
MAY YOU NEVER KNOW A MCNUGGET

Fried Chicken… was published in 2002. I’m not sure how many New Orleans establishments in the book are still standing after Katrina. Willie Mae Seaton’s Willie Mae’s Scotch House restaurant was damaged by the flood the same year she won the James Beard America ‘s Classics designation award. Joe York and the Center for Documentary Projects produced “Above the Line: Saving Willie Mae’s Scotch House” in 2008. You can view it here.

Fried Chicken: An American Story is a short book that will keep a long shelf life among the cookbooks and literature. For now, I keep it with the literature.