“You know, I wanna go to Texas and be a country boy,” he said, as he stood in the sweltering shade of Baghdad’s Academy of Fine Arts. “I wanna be a cowboy, and I wanna sing like one.”

Yesterday, the Washington Post had an interesting front page article on the cultural footprint the U.S. occupation of Iraq is making on Iraqi citizens. A Quiet but Undeniable Cultural Legacy: U.S. Occupation of Iraq Will End, but a Host of American Influences May Linger by Anthony Shadid sheds light not only on what the post-occupation Iraq will look like after a lenghtly militarized encounter, but the most dominant cultural references of the U.S. Military serving in Iraq, i.e. Metallica is gaining more new fans but no mention of Miles Davis, Marc Anthony, The Roots, Foo Fighters, not even Beyonce (I’m attempting to keep it contemporary – feel free to fill in the blanks).

The military aesthetic may prove to be this occupation’s most lasting cultural artifact. If the British can claim credit for an array of industrial words used by Iraqis, including “radiator” and “machine,” the Americans are responsible for a military lexicon that is still evolving.

Military service is definitely not the same as adventure travel or cultural tourism. One is there to “do a job.” And when the job’s occupation, it’s my guess very few residents are inviting you in their homes for dinner with open arms, or taking you on a “day in the life” walking tour. I’ve been fortunate in my travels to immerse myself in the local lifestyle whereever I go.

However, if this article accurately depicts the depth of the cultural footprint of encounters between U.S. military servicemembers and citizens of the countries they are serving in, it begs for further examination of these cultural encounters: the culture(s) U.S. military personnel carry to ground them in “the comforts of home” and identity; the transformational nature of all encounters; the representational role of U.S. military in these encounters; and the unwillingness or fear of being touched by the unfamiliar. Like Anne Tyler’s Accidental Tourist, U.S. military personnel do leave home with the things they carry to do a job, with little to no intention to be touched by the places they go. But after the occupation, for both service members and Iraqi citizens, the places once called called “home,” will more than likely be another stranger to be encountered.

Shortly after 9-11 I remember friends anxiously speculating about when and where “the other shoe” was going to drop. Apparently, it has. On his final visit to Iraq, President George W. Bush appeared in a press conference with Iraqi Prime Minister Nouri al Maliki. As Bush wrapped up his remarks, an Iraqi television journalist, Muntathar al Zaidi, took off his shoes and hurled them one-by-one at President Bush saying “This is a goodbye kiss, you dog.” As another journalist and bodyguards began to pounce on Zaidi and pin him to the floor, he yelled “Killer of Iraqis. Killer of children.”

Though the current President displayed impressive reflexes, looking at this scene through a cultural lens makes it hard for me to find the humor in the moment. I read about it on my PDA yesterday evening, and my jaw dropped. The meaning in Arab culture (and in Indonesia) of having the sole of a shoe that has stepped on the untouchable exposed to your face. To be called a dog. It almost resembles something from a Naguib Mahfouz novel. For me this is a sad chapter in U.S. foreign affairs. 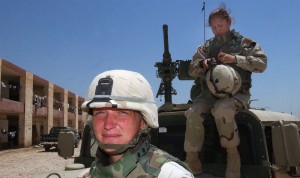 Is St. Paul, Minnesota gearing up for another Chicago ’68 or NYC ’04? During the weekend, members of the St. Paul and Ramsey County sheriff’s office conducted pre-convention raids on citizens supsected of anti-war protests during the Republican Convnention. Video and story are available on CommonDreams.org via Salon.com.

Apparently, these preemptive strikes haven’t deterred anti-war marchers who made their way from the Minnesota state capital to the Xcel Center today where the subdued day 1 of the RNC convention is taking place. Convention events have been delayed to monitor activities related to Hurricaine Gustav, now downgraded to a category 2 which has some New Orleaneans breathing a sigh of relief. Let’s see how the levees hold up with the rising water. Apparently, Gustav has given Bush/Cheney a hall pass from the convention, saving the candidate McCain from further public association, although in ’04 the public display of closeness produced a photo op (the hug) that might be a little difficult to shake off.

Chicago ’68 didn’t happen in Denver for all the anticipation by Rush chaos operators, PUMA, anarchists, and media hypos. Not that there weren’t any scuffles or run ins with police. CodePink has a video link to the Rocky Mountain News from day 1 of the DNC convention. That police person who hit the CodePink protester was removed from demonstration duty. [My grandfather, one of the biggest, baddest men in the county, had absolutely no respect for men who hit women.]

CodePink has been invited to report in this Thursday, September 4 @ 6:30 PM, when ITVS and WHUT present a free screening of the documentary CHICAGO 10 at Busboys and Poets (2021 14th St., NW). There’s a reservation request email: chicago10@communitycinema-dc.org. After the film there will be a community dialogue with activists from 1968 and 2008. Other Community Cinema screenings of CHICAGO 10 are happening in over 50 venues across the country during the months of September and October. Visit www.pbs.org/independentlens/getinvolved. CHICAGO 10 will broadcast on Independent Lens on PBS stations in October.