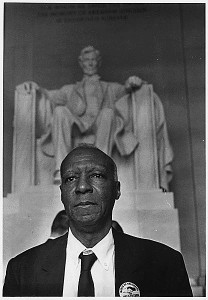 When labor leader A. Philip Randolph, organized a special march in Washington, DC for “Jobs and Freedom” in 1963, I have no doubt Randolph made deliberate choices on the date — August 28– and the venue — the Lincoln Memorial — as organizers did on the program and selection of speakers.

On this day in 1955 Emmett Till, a black 14-year-old teenager from Chicago was brutally murdered/lynched in Money, Mississippi for whistling at a white woman named Carolyn Bryant outside a small grocery store. His body was found three days later in the Tallahatchie River disfigured from beatings, torture, bullet wounds, and a 70-pound cotton gin tied around his neck with barbed wire. The prime suspects, including Carolyn’s husband Roy Bryant, were acquitted by a 12-member white jury. The suspects later admitted they were guilty of the crime but were never jailed (they are now deceased). Emmett’s mother Mamie Till insisted on an open-casket public viewing of her son’s body displayed just as he was found. The impact of the viewing shocked and disturbed many. It also moved more people to action. Mamie Till’s decision marked a major turning point for the civil rights movement.

Perhaps Randolph was also thinking about 1939, the year contralto Marian Anderson was barred from performing in DAR’s Constitution Hall because the venue was segregated and Anderson, who had performed with the Metropolitan Opera, was a “Negro.” First Lady Eleanor Roosevelt withdrew her membership to DAR in protest. The concert was moved to the steps of the Lincoln Memorial thanks to the efforts of concert organizers including Howard University and Harold Ickes, Interior Secretary who gave a great introductory speech which is rarely mentioned in this story. [Anderson was invited back by DAR to perform in Constitution Hall in 1942.] Considering the events of the day, this newsreel has a fascinating introductory slide.

I played the newsreel of Secretary Ickes speech and Anderson’s performance before an audience in 2009. The audience broke out in applause after the final strains of “Let Freedom Ring” and that was in the middle of the program. Even Forrest Gump can’t shake off the majestic moment of contralto Marion Anderson singing at the foot of Lincoln. And as “footnote,” the Lincoln Memorial was built as a tribute to Lincoln’s legacy in the preservation of the Union after the Civil War as well as his as being the great emancipator.

Randolph obviously knew the power of symbolism as well as time and place. He probably also had the benefit of a few Lincoln Republicans in the mix. Today’s organizers know the power of conflict especially in attracting media attention without getting any real important work done. Conflict oils the machine. It can also be used strategically to distract while others carry out an agenda with little notice. For better or worst, this still doesn’t give the greater society a foundation to build on.

The debate on whether Glenn Beck deliberately or unconsciously scheduled his “Restoring Honor” rally on the anniversary of the 1963 March on Washington for the “Tea Party” or whomever is so not the point. Technically, the Lincoln Memorial is a public space requiring a permit for gatherings. And Beck’s event is to raise money for scholarships to benefit the children of special operations veterans through a charity called Special Operations Warrior Foundation. After the overhead expenses and salaries are paid, the charity is expected to receive the remaining funds – follow the money. Even in the President’s weekly on the end of combat operations in Iraq, he outlines support for veterans and families of men and women who’ve served.

But there is no reason why we also can’t pick where “Jobs and Freedom” left off especially now when unemployment is at 10% and even greater among African Americans, Hispanic Americans, and young adults across the board. A livable wage is not a pact with the devil and unemployment benefits are not “entitlements” for people who don’t want to work. Sure there are people who say an unemployment check will give him/her more time — more time to find the job he/she wants and can do well. Isn’t that what the American dream is all about?

Let’s face it, if Beck, Palin, Fox and other opinion outlets were around in 1963, they would’ve done their darnest to shut the march down in the most blatant ways. Of course, not because of the color of the organizers’ skin, but the content of Randolph’s character. A. Philip Randolph was a socialist. And since King was affiliated, his dream would’ve been branded as a quest for a Marxist utopia.

1963’s march on Washington wasn’t just about a great speech or the opportunity for Martin Luther King, Jr. to declare his legacy. It was a culmination and coalition of people and events that collectively asked the nation to live up to its creed, values, and virtues. Is it just coincidence Till was murdered in a town called “Money.” For those who’d like to move beyond divisiveness, “Jobs and Freedom” is clear and relevant. It’s just plain American to me.