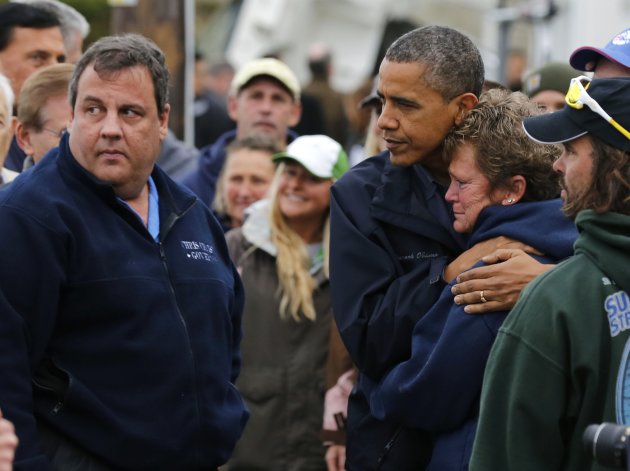 President Barack Obama made the midnight call to Governor Chris Christie as Sandy began to wreak havoc on the east coast offering Christie whatever resources he needed. Christie strikes me as one of those guys who never forgets a favor even if he’s talked trash about you the week before. Hey, that’s the way it’s done in New Jersey. Whatever the motives, nobody whose electricity is blown or loss their home and/or a family member in the storm could [in the words of the Gov] “give a damn.”

Mayor Bloomberg throws Massachusetts Governor and Republican candidate Mitt Romney a few compliments on his work in Massachusetts. But the mayor has been rubbed the wrong way by Romney’s extreme right role reversal during the course of his campaign for the White House.

One sees climate change as an urgent problem that threatens our planet; one does not. I want our president to place scientific evidence and risk management above electoral politics.

Days before the storm, the former Republican turned Independent mayor formed his own Super-PAC to reward moderate candidates in any party.

Regardless of what people think about government, it is the first call and responder following a natural disaster. It is the plan and the backup plan. In the aftermath of Sandy, New York and New Jersey may be defining the political football of “bipartisanship.” Sure New Jersey and New York trend blue even when the top tier is red. But in an emergency, color shouldn’t be an issue.