As “hoodie” photos flood the internet from known and unknown individuals around the country, it’s no surprise that the attorneys for George Zimmerman have done what defense attorneys do — “muddy the waters” of the story of their 28 year old Hispanic/White client who, on February 26, 2012, shot an unarmed 17 year old African American teen named Treyvon Martin in the “duty” of his “neighborhood watch” patrol in the already racially charged Sanford, Florida. The media is in that lockstep as well. George Zimmerman is just one face in the crowd with a little Photoshop curving to punch up or down the color. Two weeks ago his single image was up for interpretation. Was he white? Was this a police photo? The only constant was that he shot Treyvon Martin. Only two people know the complete story. His word against a dead teen. Treyvon Martin has taken 3 faces leading into the classic single story line — the evolution of the menacing Black man. Florida’s “Stand Your Ground” law that protects persons from prosecution who think you may be a threat after shooting and/or killing you in self-defense is just words on paper. Nothing visually compelling to share on FB; too long to tweet. Does this look suspicious? I’m just sayin’. 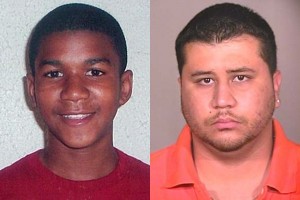 Zimmerman/Martin approx. 1 week ago (at the beginning of symbolic “hoodie” demonstrations protesting no arrests in the shooting death of Treyvon Martin) 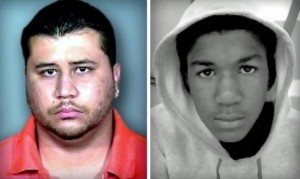 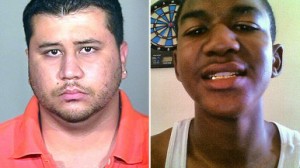