Yes, they did it! 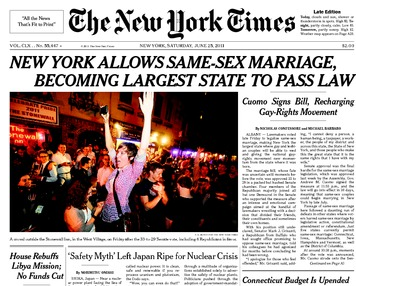 Here comes the bride/bride, groom/groom, bride/groom. Couples willing and committed to taking that next step can, and will have all the rights and benefits that come with the package in New York state.

From today’s New York Times:
With his position still undeclared, Senator Mark J. Grisanti, a Republican from Buffalo who had sought office promising to oppose same-sex marriage, told his colleagues he had agonized for months before concluding he had been wrong.

“I apologize for those who feel offended,” Mr. Grisanti said, adding, “I cannot deny a person, a human being, a taxpayer, a worker, the people of my district and across this state, the State of New York, and those people who make this the great state that it is the same rights that I have with my wife.”

Maybe it’s time to switch the “Virginia is for lovers” tag-line to the northern state. Champagne and sparkling cider time! 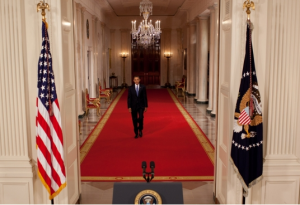 This week President Barack Obama outlined his plan for U.S. troop drawdown (and retention) in Afghanistan. Fortunately Michel Martin picked up the missing bullet point – Afghan women – this week on “Tell Me More.” Kudos to Michel and her producers at NPR.

The goal posts for this operation have been moved ten times over for the past 9 years. The 2003 Iraq war was a total shift in focus, priorities, and hidden agendas. President Bush’s goal–track down and capture/kill Osama bin Laden — was completed this year by President Obama’s team with moderate fan fare. Compare that to President Bush when he touched down by fighter jet on the carrier. Why the victory dance at half-time? The clock’s still running. Lots of money has been made by independent contractors thanks to their friends in the right places.

Everybody knew that the Taliban was originally an instrument for Pakistani colonization of Afghanistan. Everybody knew that al-Qaeda forces were being sheltered in the Pakistani frontier town of Quetta, and that Khalid Sheikh Muhammed was found hiding in Rawalpindi, the headquarters of the Pakistani Army. Bernard-Henri Lévy once even produced a damning time line showing that every Pakistani “capture” of a wanted jihadist had occurred the week immediately preceding a vote in Congress on subventions to the government in Islamabad. But not even I was cynical enough to believe that Osama bin Laden himself would be given a villa in a Pakistani garrison town on Islamabad’s periphery.

Even if Hitchens had 30 extra years on the clock, I don’t think he’d pull back on what he’s laid out in the commentary.

The goal post moved again in 2009, and candidate Obama did not hide his intentions or opinions on the matter. President Karzai is a diplomatic annoyance that, like many in his position, has an end point (and I betcha, his own exit strategy) in the foreseeable future. It’s about Pakistan now. And what about the women?

I treat these things like “American Idol,” – when you get down to the final four, I’ll tune in. For the “Tea Party” people who want to take their country back, my gut says there are Republicans who are quietly wishing they could take their party back. Let’s bring back the old “normal.” The compromise would be a Romney-esque/Bachmann-esque ticket to win. But “compromise” isn’t in the party vocabulary right now. In the meantime, Republican governors are doing what they can to weaken the opponents’/incumbent’s base state-by-state. And I guess it’s a wait and see how long the majority in Congress can keep their foot on the neck of any economic recovery while a Democrat occupies the executive office. Who’ll cry “uncle” first? The Democrats in office or the unemployed?

This was the funniest I’ve heard former President Bill Clinton in a long time. He was the guest for “Not My Job” on the NPR radio game show “Wait, Wait….Don’t Tell Me!”

“The worst thing about not being president anymore is I was disoriented for three weeks because nobody ever played a song when I walked in a room. I didn’t know where I was.”

But a poignant moment too.
SAGAL: Well, actually I’m curious about your life these days. Can I ask you in general, what is more fun: being president or being ex-president?

President CLINTON: I guess in terms of raw fun, I’ve never had any more fun in my life, I love this. But I loved being president too. Even the bad days were good. When you’re president, you have more power to help more people, but you also are the prisoner of circumstances as well, and countervailing political forces more.

President CLINTON: When you’re a former president, you have much less power, but you have a lifetime of experience and contacts and if you’ve got the energy, you can bring influence to bear on a small but still fairly substantial number of things where you can concentrate on it because you don’t have to change the subject when you wake up in the morning and there’s something else in the newspaper.