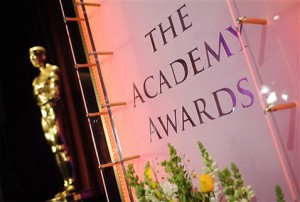 Tonight the 83rd Academy Awards Ceremony takes place in Los Angeles (5 PM PST). To be honest, there’s nothing like being in LA during the Academy Awards. The evening starts early and you have an extra four hours to party hop or do whatever-it-is people do before the limo traffic gets thick. The hype around Oscar is just infectious.

There are two films up for best picture (out of 10) that catch my attention. They both depict two different kinds of privileged classes and two different reactions to privilege. They are “The King’s Speech” and “The Social Network.” These are two films I have seen and they are two films highly favored for Best Picture. The upsets would be “Winters Bone,” “True Grit,” “The Fighter,” “127 Hours,” and maybe, just maybe “The Kids Are Alright,” “Toy Story 3,” and “The Black Swan.” I managed to see 5 of the 10.

In some ways I think the Best Picture race is between “The King’s Speech” and “The Social Network.” It pits traditional Hollywood against the younger more tech savvy movie masters. Voting for “The Social Network” may make some boomer members feel that they can keep up or even patriotic for supporting American innovation. But here’s why these two stand out for me. 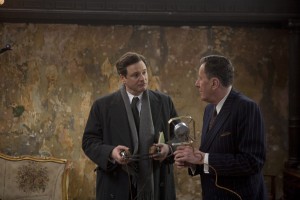 In “The King’s Speech,” Colin Firth portrays the soon-to-be King George VI of England, a man of great privilege, the symbolic master of the fading British empire, who must be the voice of the country that is about to go to war, a very serious and ultimately deadly war with Germany. It’s not a matter of “Me Talk Pretty One Day” for George VI, but to overcome an embarrassing and potentially politically debilitating stutter even though he is on the top of the chain in terms of title, class, and privilege. If this was Henry the VIII, people would be put on the rack for bringing attention to the King’s speech. Soon to be King George VI’s encounter with the speech therapist, Lionel Logue (played by Geoffrey Rush), who is also the lowest of the low on the class pecking order for being an “actor” by trade and Australian, brings out the substance of both men. George VI has another hurdle in his struggle — his class prejudices. Lionel has to hold the future King accountable to a goal and purpose. Whereas duty does not strike a chord with the older brother King Edward who abdicates the throne for the woman he loves, Wallis Simpson of Baltimore (a nice little class jab made in the movie on that accord), George, somewhat begrudgingly must assume the responsibility as sovereign at the brink of a greater crisis. 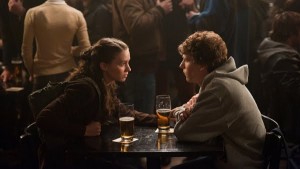 “The Social Network” depicts another kind of privilege class sometimes called the “Masters of the Universe” at Harvard University. The film is based on a kiss-and-tell kind of biography about Mark Zuckerberg, one of the founders of Facebook and now its CEO and president as well as “Time’s Person of the Year in 2010” and the world’s youngest billionaire ever. As in “The King’s Speech,” real names are used, real situations, but liberties are taken for the sake of drama. Aaron Sorkin of “West Wing” fame, pinned the script adaptation. “The Social Network” kicks off with a multi-page dialogue between Mark played by Jessie Eisenberg, and his girlfriend who attends Boston University. It’s obvious to Mark (and should be to his girlfriend), Harvard has the upper hand in this situation. Can the girlfriend keep up? Can an audience so accustomed to seeing more action in front of the camera? Words matter in this film too. Mark is so kinetic in his back-handed compliments, insults, subject shifting, and almost combative conversation rhythm you start to wonder, “How did these two hook up in the first place?” And I guess that’s what the girlfriend realizes when she dumps him on the spot. Thus the catalyst for “The Facebook.”

Mark is not one of “the chosen” on campus like his roommate and future Facebook partner Eduardo Saverin (played by Andrew Garfield) who is tapped to join one of the exclusive student clubs. But Mark does believe in his intellectual superiority. Mark hands Eduardo some back-handed compliments about making the first cut for the club as well as if Eduardo was the ex-girlfriend. Eduardo is moving ahead of Mark on the social scale. Mark wants and needs some social currency, and the way to get it is to create a new social currency. The Winklevoss twins who are rich in social currency as well as being legacy students, have sort of the same idea, but on a Harvard playing field. They invite Mark in (but no further than the bike room) to build the social network platform. Mark instead builds his own with Eduardo’s help. Eventually Napster founder Sean Parker (played by Justin Timberlake) discovers the new emerging master of the social network, and inserts himself into the business plan. It takes a lawsuit for Eduardo to pull the knife from his back. Mark spends half the movie in litigation with the Winklevoss twins and Eduardo. Oddly, since “The Social Network” Eduardo Saverin has shown up as a search term on search engines more than Mark Zuckerberg according to Forbes.

“To whom much is given, much is required,” the saying goes. “The King’s Speech” brings a character with privilege into a situation where he must be accountable to more than just himself. There’s something bigger at stake than meeting girls, revenge, or being the big man on campus and eventually the world. “The Social Network” taps into a different kind of privileged class where the tools of warfare are money, appearance, charisma, brains, and, often in these environments, legacy (did your dad, grand dad, etc attend Harvard). Personally, Facebook became more interesting for me as an organizing tool. Maybe that’s “The Social Network” sequel.

“The Social Network” is not your daddy’s Harvard University of “The Paper Chase” where impressing a legendary yet stern professor gave you a self-esteem jolt. Professors are at the bottom of the social pecking order in the paperless Harvard where a blog post or a can of Red Bull will do just as well for the jolt. There is no parental filter to block anything in “The Social Network.” I can’t imagine being sued for millions of dollars and not having at least one of my family members either in the room during the litigation or outside the door for support.

Class is so much easier to peg when top dog is a monarchy. Either you are or you aren’t. It’s much trickier here in America. There’s the perception that it’s an even playing field. All it takes is talent and ability and when that pays off in terms of insane profits, you’re in. One thing “The Social Network” does well is show the potholes in that playing field among its own peers; even more so by the people you don’t see vying for a spot in that order, and the activities of women who spend more time stripping for the future Masters of the Universe than finding an internship route to being a hedge fund manager.

On Harvard’s Admissions website, it is written:
There is fairly universal agreement that much of the value of a Harvard education lies in things learned outside the classroom and in the relationships established with others in the community, especially with fellow students.

Maybe it is important that Harvard be seen as a “networking” opportunity and state schools are where you actually learn something. The upper hands always get a pass for their social deviance or defiance. There is no accountability to anything or anyone in “The Social Network” except to one’s self. Can’t wait to see the film about two best friends fighting over finding the cure for cancer.