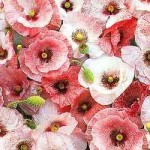 On the plane were Poland’s top military officials including the army chief of staff, the navy chief commander, and the commander of land forces. The President of Poland presides over the military. There is a Prime Minister (Donald Tusk).

And sadly, heroes of Poland’s Solidarity movement (per The Washington Post):
“Anna Walentynowicz, 80, the diminutive crane operator whose firing in August 1980 from the Lenin Shipyards in Gdansk helped spark the creation of Solidarity, the political movement that nine years later helped topple the communist government; and the last Polish president-in-exile, Ryszard Kaczorowski, 90, who stepped down when Lech Walesa, the leader of Solidarity, became the first post-communist president of Poland.”

The delegation was traveling to Russia to honor the 20,000 Polish officers executed by Soviet Secret agents in 1940 when Poland was divided between Nazi Germany and the USSR.

This evening I noticed bouquets of flowers piled outside the Polish Embassy on 16th Street here in Washington. A time of tragic loss; and sympathy for the people of Poland.

Downtown DC will be shut down pretty much at the top of next week for the multinational Nuclear Security Summit at the Walter Washington Convention Center. [Hopefully the Franchise Convention banner will be removed from the front by then.] The purpose of the summit is to focus on keeping nuclear materials out of the hands of terrorists.

The sidewalk barriers have already been unloaded on Massachusetts Avenue. Hargrove Inc., a trade show, events and exhibits producer will design the meeting areas. [I say this as an events planner. Inquiring minds like me want to know.] They also worked on the G20 Summit in Pittsburgh.

Federal government employees and others have been given permission to work from home, take time off, or show up late as there will be street and bridge closings. For some of us, mail delivery will be halted. Streets will close 10 PM tomorrow (Sunday) and reopen 8 PM Tuesday. Sounds like nuclear winter. Better stock up on milk and bread.

PRESIDENT’S WEEKLY
My taxes are done. How ’bout your’s? Personally, I’ll be shocked to get a refund. Maybe I should give the White House Tax Saving tool a try just to see what I can expect. A refund would be another shock for me.