Something about “back to school” that feels like a new beginning even if you’ve so-called graduated from it all. Saturday, I joined a newly formed group called the Grassroots Education Project to assist Harriet Tubman Elementary get in shape for the first day of school – that’s today. Neither rain or stifling humidity could keep the volunteers away thanks to the persistence of Adam Barr from the DC for Obama team who organized this effort which will continue through the school year. Canvassing identified 14 additional neighborhood volunteers.

Tubman is located on 13th Street, NW at Irving here in Washington, DC. I used to pass it every morning on the way to the 9-5 job, so naturally I noticed the fresh coat of paint and new windows when I pulled up Saturday. Apparently, Tubman is designated for “modernization” by DC Public Schools. The classrooms have been fitted with LCD projectors, smart boards, and air conditioning!!! among other upgrades.

On Saturday Tubman was a show piece for DCPS officials. Local media got the grand tour by principal Harry Hughes. Chancellor Michelle Rhee showed up, but I missed her. Too busy adjusting new desks, papering the bulletin boards and stocking cabinets. How well I remember loving the smell of “new” during my school days. I have to say, I was a bit concerned about all the sawing going on two days before the doors officially open. But I’ve witnessed an extreme makeover of a public school in less than 18 hours. That was when the POTUS was making a visit to my high school. Magic elves have nothing on a President’s advance team.

Here are some pics of the day.


DEEP IN THE HEART OF TEXAS – Ground Zero for Education Standards
Texas is the second largest purchaser of school textbooks and curricula which in making a market impact also translates to making an impact on textbook and curricula content in public k-12 schools throughout the country. Which is why it’s important to give some attention to the Texas Board of Education’s debate to remove certain “liberal” historic persons and events from high school text books in the state’s districts. Read the overview by Meteor Blades of Daily Kos here.

And there’s a hit list: Thurgood Marshall who was part of the team that litigated school desegregation before the U.S. Supreme Court, and was the first African American Supreme Court Justice; Cesar Chavez who led the freedom fight to secure labor rights for field workers; and Anne Hutchinson, who was banished from the Puritan Colony for insisting on women’s rights and religious freedom. She helped establish a new colony that became the state of Rhode Island.

A six-member panel has been set up by the Texas Board of Education to advise teams of teachers, academics, and community representatives to rewrite the standards for social studies textbooks and curricula. [The non-partisan League of Women Voters should jump into this.] According to the Houston Chronicle, the suggestions for revision include search and replace (Thurgood Marshall for Newt Gingrich); and a “fair and balanced” charade – include both sides to “see what the differences are and be able to define those differences,” board member Ken Mercer R-San Antonio suggests. His reading lists includes Sean Hannity and fmr Arkansas Governor and presidential candidate Mike Huckabee. Even when Mercer is adding “liberals” to his “conservatives” list, it is persons from organizations or advocacy groups that are in direct conflict with his conservative counterparts. This is akin to having history written by publicists, and pundits on CNN and FOX News.

There will be a quiz.

THE ACID OF EVIL
“The people who did this to me don’t want women to be educated. They want us to be stupid things.”


Dexter Filkins is compelled to risk journalistic standards to help students at the Mirwais Mena School for Girls on the outskirts of Kandahar. The school was the target of an acid attack earlier this year. “A School Bus for Shamsia” was published on-line before appearing in a special issue of the New York Times [Sunday] Magazine devoted to “Saving the World’s Women.” A great issue! 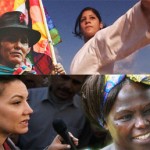 Lesson plans and video modules encourage students to learn about international struggles and take an active role in addressing local concerns. Lessons are directed toward high school and college students.

The “Women’s Empowerment” curriculum is FREE and available on-line at www.pbs.org/independentlens/classroom. Check out other Classroom offerings.

Update: Mayor Adrian Fenty and his wife Michelle were seen taking one of their sons to Lafayette Elementary School today. The 9-year-old Fenty twins, Andrew and Matthew, were enrolled in a private Montessori school that runs through 3rd grade. Marion Barry was the last DC Mayor to enroll his child in a DC public school. Mayors Washington, Pratt-Kelly, and Williams didn’t have school-age children at the time of their terms. Both Mayor Fenty and Chancellor Michelle Rhee have children enrolled in DC Public Schools. See more about DC’s first day of school here.