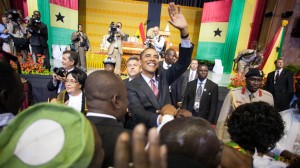 We must start from the simple premise that Africa’s future is up to Africans.
Barack Obama, President of the United States
Accra, Ghana
July 11, 2009

While spinners are spinning the U.S. President’s trip on whether or not the trip to Ghana was a snub to his ancestral home, Kenya, or if Nigeria takes offense that they weren’t “the one”, Barack Obama is making an important statement regarding the future for the continent of Africa. But E-Notes hits the breaks on this.

Obama can call for “Africa for the Africans” and it sounds like a nice drum beat or Nkrumah plays Motown, but let’s be real and critical for a moment. Obama spoke about moving beyond colonialism but he never mentioned the word Neo-colonialism. Much of the exploitation of Africa and many of the conflicts are perpetuated by outside interests. Funny how Obama can talk about Africa being a partner without questioning the “partnership” the continent has with a nation like China. Should we talk about Sudan here?

I’ve always questioned why nation states on the continent are engaged as a land mass and not as individual nation states, i.e. what’s good for Brazil is not necessarily good for South America, or what plays well in France, not so much in Europe. Maybe that answers the question, “Why Ghana?”

Personally, I would’ve like the President to have spent more than 24 hours in Ghana. Maybe it would’ve given the impression that it was more than just a “finger-wagging” pop call. Even the press corps dropped out at the G8 transfer point. Nevertheless the length of the visit didn’t tap down the excitement for the citizens whereas Europe seems to have returned to business as usual.

I’ll wait for more of my friends who are professionals and Africa watchers to weigh in on the trip.

A full transcript of President Barack Obama’s speech before Ghana’s parliament is available on the White House website.

Meanwhile, President Obama recorded his weekly address on the theme of the Recovery Act. The future takes time.