> People > Being There – The on-going quest of Fatherhood 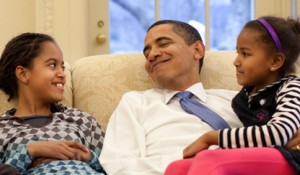 Barack Obama and I share a key identity in common -being shaped by the absence of our fathers. Though his father’s absence was more literal than mine, I still mull over which has the deepest impact: physical absence or emotional absence. I remember Joan Baez saying, the worst kind of loneliness is the loneliness of being with someone. [Note: While typing a tag for this post, I inadvertently typed “fartherhood.” hmmm]

My father died of heart failure just a few days before Father’s Day 15 years ago. I’ve been asked to write about my father. For some reason people think the father-daughter play or film will be the most revealing account of our limited and strained relationship. The quest or witholding dance seems to be a more compelling story than the having. However, I’ve written that story in bits and pieces starting with a play titled “Anthropology.” I wrote it the year my father died. I channeled the story through two voices: two college age guys burrying the ashes of the biological father who was emotionally distant, and the spiritual father who left a positive impact on a troubled youth. The actors who performed it couldn’t believe it was written by a woman. Apparently, I was so right on with the male thing.

A little bit more of my father is revealed in my Church Lady Cakes project. My father lived in the past, as my mother described, the days of eating chocolate cake and drinking lemonade at the church social. Visiting open air markets, my fascination with horses, my love of travel — all are part of my father’s story. Perhaps all these things will culminate into my own Dreams From My Father.

My father comes from a very long and deep family line that has witnessed and been affected by every major event in U.S. history. When drafting my father’s eulogy, my sister observed that sometimes the best thing a parent can give a child may be life itself and I have to say, it’s kind of cool to have such deep roots. But I still dig for his story which may be far more interesting than our story. To his nephews and cousins, he was the life of the party, generous, fun. Who was that guy?

Seeing Barack Obama with his daughters often brings tears to my eyes. Okay, maybe I do miss something that I never had with my own father. But that’s where the growing part comes, and I see clearly why fatherhood is important to the man whose father left his life at the age of two, was raised by a single parent and his grandparents, and became President of the United States. We can’t brood over our losses for a lifetime. Barack Obama says he was shaped by his father’s absence. But now he wants his own children to be shaped by their father’s presence. And I’m sure he’s doing a lot more than just being there.

This one’s for the dads – I know a lot of cool ones. HAPPY FATHER’S DAY.