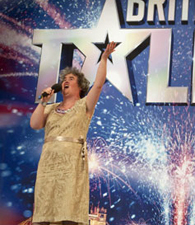 The last I checked the YouTube sensation featuring Susan Boyle’s reality check on “Britain’s Got Talent” it was over 20 million views. I’ve already seen it three times. I live for these Susan Boyle moments.

This woman is no accident. She knew she had the chops. She performed like a pro. First, she chose the right song, a song where she could insert her story and her voice to make the perfect match. She didn’t let the audience or the judge’s eye rolling break her spirit, concentration, or her purpose. Her goal was simple – to sing before a large audience. She was probably a star in her “collection of villages” before she stepped onto the sound stage.

I’ve seen these women and men in church. The minister wants to punctuate the sermon or the text. He cues someone from the audience or the choir. The congregation knows what to expect. The solo voice lifts the words to the rafters. It makes you shake to the core. People nod, stand, wave their hands in the air, applaud. After the organ or piano taps the final chords, the soloist modestly returns to their pew until they are called upon again. On the surface it appears spontaneous, but in its own way, it’s carefully choreographed. Some of these vocalists choose to give their voice as an offering, others find themselves planted until another calling comes along.

Susan Boyle knew she had a second calling. And she doesn’t seem to take it lightly. She knows she’s no American, British or Scottish idol. Already, British newspapers have called her “ugly, but…” I’ve heard those attacks too often against too many talented vocalists who have the chops and a helluva lot more talent than the whispers, posing, and gimmicks raking in the millions or even billions. “Too old, too fat, too black, too ethnic, too plain.” Odd they call her “middle aged” when she’s the same age as President Barack Obama who is often called “the young President.”

So why should these artists come out to a cynical public? Why not just love those who love you: your church, neighbors, friends and family, glee clubs or bowling leagues.

Simon Cowell has a bottom line as the title of his British reality show states – “talent.” Whereas his “American Idol” has been more popular than the American version of “Britain’s Got Talent,” rarely do these American transplants appear to place much emphasis on the bottom line – talent. [Notice, no one’s talking about their pick to win “American Idol” this week.] In fact, there’s more “attitude,” attention grabbing and self-delusion on stage than seriousness and clarity of purpose. Perhaps there was too much self-esteem building at the price of honesty. Or even, a lack of authenticity. What made Susan Boyle stand out was that she kept it real. 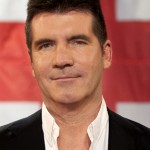 Simon Cowell is one of those people who has by now heard it all and waits for those Susan Boyles or even Fantasia moments to appear. I grew up with the Simon Cowells as teachers, trainers, and even family members. This is life when you’re training in the arts. The best of the Simons demanded the best from us. If we couldn’t be “best,” the worst case scenario was to be better than we were. They gave constructive criticism which made their few praises like jewels. Sometimes there were tears as our Simons tore into our self assessment of “pretty good.” More often the one’s who didn’t quit, sat back and took it when they called it “BS” and we responded, “you’re right.” My group didn’t hate our Simons and we knew they cared more about us and cultivating talent more than they expressed. Most of all they were protecting us from the clutches of mediocrity.

Simon’s also a businessman so he does have a talent for spotting the right gimmick that sells and it’s made him a very rich guy. I’m sure he knew he couldn’t transplant the standards of “Britain’s Got Talent” in America. Case in point, the promo for the auditions of “America’s Got Talent” asks “Do you dream of starring in Vegas?” That’s a far cry from singing for the Queen. But I haven’t seen either of these shows start to finish, so who am I to judge?

Simon also knows he’s his own best gimmick. What would these shows be without Dr. Kill-joy behind the desk. And admit it, we wait anxiously to hear what Simon says.

If President Obama intended for his comment on “The Tonight Show” about too many Simon Cowells in Washington to reflect what’s wrong with Washington, I disagree. If anything we could use a few. I’m not sure which side of the aisle the Presdient was referring, but to me, the current crew resembles a collection of Statler and Waldorfs, the two ornery old guys in the balcony from “The Muppet Show.” 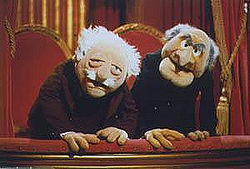 I won’t sign off giving Simon all the credit. I’ll throw something to the audience. Once Susan Boyle began to sing, the cynicism and prejudices melted away. It wasn’t the first time a song saved a soul from the lion’s den; and that’s something Simon will surely bank on.