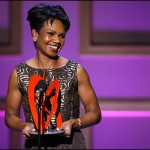 I was about to fire off a “misidentified Black person” email to the Washington Post today (if Undercover Blackman didn’t beat me to it), over Robin Givhan’s story about the Glamour [Magazine] Women of the Year awards which were held in New York this past week. [btw – the Glamour awards throw substance ahead of the do’s and don’ts of style on this one.]

At the top of the story is a photo of Secretary of State Condoleezza Rice with her hair in an up-do and just glowing – on a Halle Berry level. I really didn’t recognize her. As Robin says, “Frankly, she might have been glowing — in an ‘I’m going back to Cali’ sort of way’.” But then again I wonder. I haven’t been following Secretary Condoleezza Rice’s happiness track, but I do recall two big smiling moments: The 2003 “Mission Accomplished” landing on the USS Abraham Lincoln aircraft carrier with soon-to-be-former President George W. Bush, and in 2005 shortly after her appointment as Secretary of State in what my friend E-Bert called her Trinity look a la “The Matrix.” [See Robin’s column from February 24, 2005.] I still love those boots.

Then there’s this semi-recent moment:

I met Condoleeza Rice once, a few months after 9-11. She was very formal and guarded in her demeaner, and perhaps I shouldn’t have expected anything more at the time. She has probably soldiered the current administration’s doctrines [warts and all] perhaps more faithfully than any of the career soldiers. History will be the judge of that as well. But for now, maybe Madame Secretary sees a change she believes in.