> Politics > Sarah Palin > Second Place, But No Crown for Palin in the VP Debate 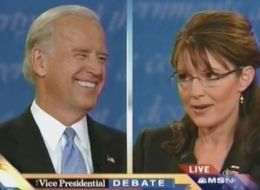 The most gracious thing I can say about Gov. Sarah Palin’s debate performance last night was that she did not go out a loser — but like the Miss Alaska contest, she didn’t get the crown either. Senator Joe Biden was the clear winner of the night.

Both VP candidates disappointed their opposing parties and their loyalists: Palin stayed on talking points and message without flubbing her lines; Biden remained engaged with the audience and was fluid with the answers without gaffes or condescension towards Palin. In fact it was Biden who provided the surprise moment taking an emotional pause when talking about being a single father when a car accident killed his first wife and daughter, leaving one of his sons in critical condition. As blogger Leah McElrath Renna said on Huffington Post, “Joe Biden did more for the equality of the sexes with his honest display of paternal emotion during the vice presidential debate than Sarah Palin’s presence on the executive ticket has or will ever do.” Was this Biden’s Hillary Clinton moment (ref. New Hampshire primaries)? I think this really caught him off guard. Yes, Washington insiders are human beings, too.

Palin could’ve complimented this moment by demonstrating that she has emotional maturity and empathy. But while Biden was pulling back the tear, Palin was smiling pretty, and gave the same smile when the Senator talked about genocide in Dafur. whoa.

Palin’s script allowed her to be herself which connects with her fan base. The golly gee “betcha’s” the dropping of the “g” on word endings the shout out to “Joe Sixpack” gave Palin the “folksy” appeal that for others would’ve been called “ghetto.” That’s how double standards work y’all.

Palin’s basically “beauty contest” answers worked for her in this debate format (short response time) supported by the low expectations following the Katie Couric interviews. She didn’t have to elaborate. That format may have worked in Biden’s favor as well who’s prone to gaffe from time-to-time. Either you hate that about Biden or you say “Well, you know Joe.” But if the goal in last night’s debate was to raise the likeability bar, well I heard the Ohio numbers in the CNN live meter went into the basement on Palin when she said Alaska was the heartland. Though I don’t think this debate is a game changer, however, the VP candidates did put the emphasis of their remarks where it belongs: on the top of the ticket (McCain/Obama).

After the debate and feeling a bit stuffed with Chinese take-out, we switched to the pundits, mostly men, being overly generous and cautious in their commentary which focused almost soley on Palin. Were they afraid of being acused of sexism? Until this year, these guys and their associates have never had an opportunity to yap about viable and serious women candidates for both the Presidential and Vice Presidential slots; so they’re on a learning curve too. But by setting the bar this low is in itself a form of sexism. It’s treating women, and Palin specifically, like a child who needs confidence boosting for a contest that’s become a game of catch up for her? Overall it’s condescending to women, and it certainly doesn’t help the voters.

So my next round of letters to the bureau chiefs — start recruiting more women to give political commentary. Catch up!

But let me put myself in Sarah Palin’s peek-a-boo pumps for a moment. What would I have learned from all this?
– First of all when the stakes are this high (unemployment, shotty economics, two wars) you just can’t cram and wing this stuff not in a debate, not in an election, and definitely not in the executive office. NOT ANYMORE!
– Read the Charters of Freedom: the Constitution, the Bill of Rights, the Declaration of Independence. I’ve done this, even though I’m not the VP pick. If Palin really believes in our democracy and what the Founding Fathers invisioned, Dick Cheney is not the example to follow. But it’s only a month before elections. This would be a catch up assignment too.
– Cute only goes so far and lasts but so long. Eventually you’re going to have to back your stuff up with real substance if you want to stay viable. Most especially for women.
– Understand corruption begins at home, not in Washington. This is a “transitory city” with some permanent residents who are pretty much at the mercy of the whims of people who treat the city like tissue (use it then lose it). Your Washington corruption is a round-trip ticket, and it came in handy to finance some of Alaska’s state infrastructure and pet projects. Okay, I’m a native Washingtonian, so that was a HOLD MY EARRINGS moment for me in the debate.

What if Sarah Palin had won the Miss Alaska contest instead of coming in 2nd place? Would that have been a game changer in her life and ambitions? Would she have been interviewing Katie Couric being that she was a broadcast journalism major in one of the 5 or 6 colleges she attended? Or did she cram and try to wing that contest too? For some reason, I get the feeling Sarah’s going to learn something from this and will not be deleting the addresses of her new political friends from her mailbox anytime soon.

Final note – Gwen Ifill gets the crown. If there’s anyone who can be fair and balanced under the gun and under any political operation’s pressure or supression, it’s Gwen Ifill. Tim Russert would’ve been proud.